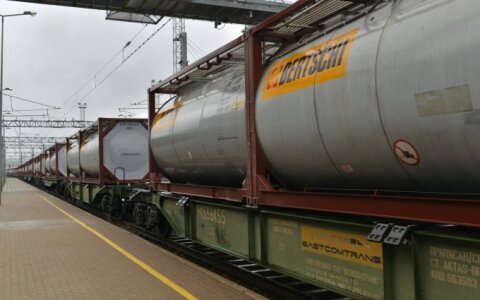 If the European Union agrees on sectoral sanctions for Belarus, exports of fertilizers produced in this country via EU countries, including Lithuania, should be suspended, diplomatic sources have told BNS.

The legislative process in the EU to endorse sanctions is ongoing and is expected to be finished on Thursday, the two sources said, adding that the package of sectoral sanctions, now being drafted, has received approval from EU foreign ministers in Brussels on Monday. It covers seven economy sectors, including trade in Belarusian fertilizers.

"If that is confirmed, fertilizer transit via the EU and imports into EU countries will stop," one of the diplomatic sources told BNS.

Belarus is home to one of the biggest potassium fertilizer producer, Belaruskali. The company exports via the Lithuanian port of Klaipeda and used services of Lietuvos Gelezinkeliai (Lithuanian Railways), the country's state-owned railway company.

These companies would lose tens of millions euros annually without Belaruskali fertilizers.

The preparation of sectoral sanctions for Belarus come in response to the forced diversion and landing by the Minsk regime of a Ryanair passenger plane, en route from Athens to Vilnius, in late May to detain opposition blogger Raman Pratasevich and his girlfriend Sofia Sapega.

Lithuanian Foreign Minister Gabrielius Landsbergis says EU sanctions are aimed at forcing the Lukashenko regime to change its policies, and economic pressure on Minsk, also felt by Russia, could ensure that.

"Russia will have to refinance everything that (Belarus) loses," he told journalists upon arrival to the ministerial meeting in Brussels on Monday. "This means Putin might call his good friend Lukashenko and ask him not to take certain steps, release political prisoners, to change the policy. (...) It could be quite effective."

EU leader will also discuss sectoral sanctions for Belarus on Thursday. Lithuanian President Gitanas Nauseda has vowed to back an EU agreement on these sanctions, whatever it might be.