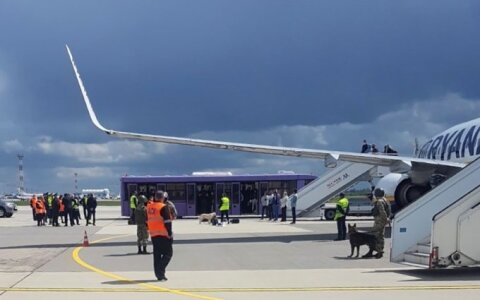 A probe into the forced grounding of a Ryanair flight by the Belarusian regime, which then detained Belarusian opposition blogger Raman Pratasevich and his girlfriend, is underway at a sufficiently intensive pace, Lithuanian Prosecutor General Nida Grunskiene has said.

“The pre-trial investigation is underway at a sufficiently intensive pace. We have formed a joint investigation team with Polish officials and European Investigation Orders have been sent to several more countries, such as Greece and Ireland. Also, we cooperate with Ryanair. It would be good if that cooperation were more goodwill, but we have what we have,” she told reporters at the Seimas on Tuesday.

Prosecutors would like the air carrier to provide the requested information “somewhat faster”, the prosecutor general explained.

There had not been any suspects named thus far, Grunskiene said.

Pratasevich and his girlfriend Sofia Sapega were detained in Minsk on May 23 after the Belarusian regime forced a Ryanair passenger plane en route from Athens to Vilnius to divert and land in Minsk, sparking outrage in the West and calls for tougher sanctions for the Minsk regime.