Almost 5th of patients confess to giving bribe to medics 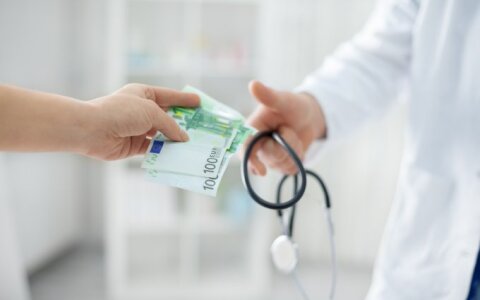 Every fifth (19 percent) resident who visited health care institutions confessed to giving a bribe, and every fourth (25 percent) used personal connections at least once, figures by the Transparency International Lithuanian Chapter, released on Tuesday, show.

Based on levels of bribery in the healthcare system, "Lithuania still remains one of the most corrupt countries in the European Union (EU)", the latest “Transparency International” Global Corruption Barometer 2021 reveals.

Every fifth patient (22 per cent) confessed to having given a bribe to a healthcare sector representative in Romania. This is the only state in the EU, where the levels of bribery in the healthcare system are higher than in Lithuania.

In Denmark, 1 percent claims to have given a bribe in healthcare institutions, 2 percent in Estonia, 10 percent in both Latvia and Poland.

"It‘s disappointing that the extent of bribery in the healthcare sector does not allow Lithuania to finally get rid of the Soviet legacy. If we finally dealt with this issue, we would become more like our Northern neighbors that give almost no bribes. I see this as one of the key anti-corruption tasks for this Government and, in particular, the Ministry of Health," said Sergejus Muravjovas, CEO of Transparency International Lithuania, was quoted as saying in the statement.

Every fourth resident (27 percent) claims to have used personal connections at least once in order to get the services they needed. The highest number of those stating that are in Czech Republic (57 per cent), the lowest in Estonia (12 per cent). The EU average stands at 33 per cent.

6 out of 10 residents think that Lithuania‘s Government is pretty much run by a few big interest groups looking out for themselves first. The biggest number of those who think that are in Slovenia (70 percent), the smallest – in Sweden (20 percent). The EU average stands at 53 percent.

Only every fourth resident believes that the Government in Lithuania has been transparent in its handling of the COVID-19 pandemic. The highest number of residents who state that are in Sweden (72 percent), the lowest in Spain (20 percent). The EU average stands at 44 per cent.

Three times more residents than four years ago favorably assess how the Government is handling the task of fighting corruption (42 per cent in 2020 compared to 13 per cent in 2016). In addition, every third resident (32 per cent) believes that the level of corruption has decreased in the country. Only in Slovakia (39 per cent) and Greece (33 percent) more residents claim that.

4 out of 10 (44 percent) residents claim that the Government does not take their views into account when making decisions. The highest number of those who think that are in Croatia (71 percent), lowest in Finland (17 percent).

6 out of 10 residents agree (58 percent) that they can make a difference in the fight against corruption. The highest number of those who think that are in Italy and Portugal (85 percent), the lowest in Poland (23 percent). The EU average stands at 64 per cent. Almost half of the residents (45 per cent) claim that ordinary people in Lithuania can report incidents of corruption without the fear of retaliation. The EU average stands at 47 per cent.

Almost every tenth Lithuanian resident (8 percent) claims to have experienced situations in which public officials make requests of a sexual nature in exchange for government service. The highest number of those who claim that are in Bulgaria (17 percent), the lowest in Finland (2 percent). The EU average stands 7 per cent.

Global Corruption Barometer is a sociological research organized by “Transparency International” which purpose is to find out people‘s experience in corruption and their opinion on the corruption of state‘s institutions.

Almost 5th of patients confess to giving bribe to medics