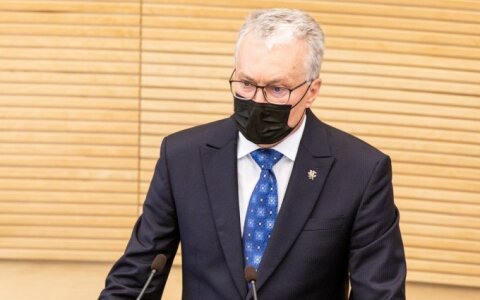 Russia’s ingoing occupation of the Georgian regions of Abkhazia and Tskhinvali/South Ossetia is a violation of international law, says Lithuanian President Gitanas Nauseda who is in Georgia right now.

On Thursday, Nauseda visited the town of Didi Khurvaleti near the administrative border with the occupied territories of South Ossetia, and the camp of internally displaced persons (IDP) in Patara Khurvaleti, where he met with the local community.

"Russia must assume responsibility for the occupation of Abkhazia and South Ossetia and human rights violations in these regions. It must also withdraw the armed forces from the occupied territories of Georgia. Consistent efforts and pressure from the international community are needed to make Russia comply with its international obligations," the President said as quoted in a statement released by the presidential press service.

It also stated that Lithuania has been actively raising this issue at international forums since 2008.

Nauseda later visited the camp of internally displaced persons (IDP) in Patara Khurvaleti where he met with the local community.

Representatives of the EU Monitoring Mission briefed the president on the security and humanitarian situation and the negative impact of ‘borderisation’ on the daily lives of people in conflict-affected areas, as well as the impact on the human rights situation in the region. “During the meeting with the local community, I listened to their testimonies, how ‘borderisation’ was damaging their lives, separating families, limiting freedom of movement and access to education and healthcare. The threats of terror and kidnapping are obvious in this region,” the president said after visiting the IDP camp.

Across Georgia, there are over 300 thousand internally displaced persons. Progress of the country is hardly possible without the integration of these people.

The president thanked the EU Monitoring Mission for its contribution to stability and confidence building in Georgia. This mission also includes seven Lithuanian observers.

On Friday, the second day of the visit, President Gitanas Nauseda is meeting with President Salome Zourabichvili of Georgia, Prime Minister Irakli Garibashvili, and Chairman of the Parliament Kakhaber Kutchava as well as with the local Lithuanian community.

It's Nauseda's first official visit to Georgia. He met with the Georgian president in 2019 during her visit to Lithuania.