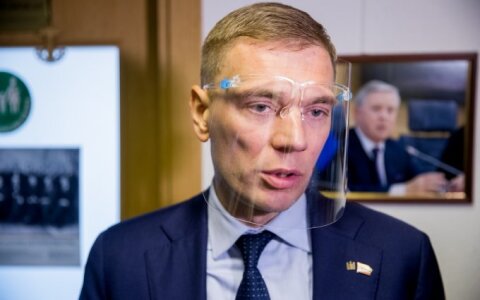 The SIS opened a pre-trial investigation, acting on a report from MP Matas Maldeikis who notified the agency of an attempt to bribe him.

Motiecius was detained on Thursday.

According to the pre-trial investigation, Motiecius approached Maldeikis in the premises of the parliament offering him a 50,000-euro bribe and asking, in exchange, to support the initiative to suspend or postpone indefinitely the adoption of amendments to the Law on Lottery and Gaming Tax and try to convince other MPs to do the same.

The investigation is led by prosecutors of the Organized Crime and Corruption Investigation Department of the Prosecutor General's Office.

Speaking with journalists, Maldeikis confirmed he was offered a bribe around a month ago and turned to the SIS immediately.

The SIS reported about the pre-trial investigation shortly after Puidokas made a statement in the Seimas that he had suffered violence at the hands of law enforcement agents.

Puidokas claimed that he had been seized by the throat and his clothes had been torn. The MP also accused officers of taking his personal belongings by force and said that his lawyer had taken a video of the incident.

“This incident has no precedent in the history of Lithuania’s parliamentarism: I suffered violence at the hands of SIS agents in my office, I was seized by the throat and my clothes were torn,” Puidokas claimed.

“I do not have any legal status – I am neither a witness nor a suspect. However, they took my personal belongings by force, scratched my hands bloody. I was short of breath, said that I can’t breathe, but they continued strangling me and did not stop,” the MP stated.

In his words, the incident appends in his office. He also called law enforcement's accusations against his assistant absurd

The SIS admitted that its officers had to use force to take the MP's phones as he refused to execute their legitimate demands.

Deputy Prosecutor General Gintas Ivanauskas, summoned to the Seimas after the incident, said an internal investigation into SIS officers' action against Puidokas would be carried out, adding that only Puidokas' version of the events is known right now.

"We should wait and the officers who are taking action should provide explanations as to how everything happened. As far as I understand, only the MP's position has been expressed," the prosecutor said.