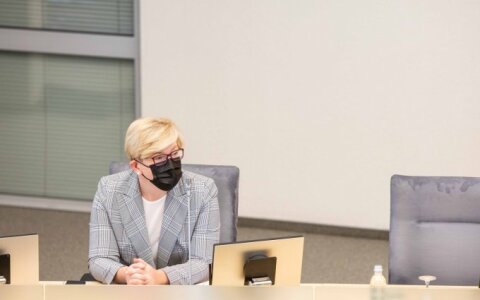 Her comment came in response to President Gitanas Nauseda's State of the Nation Address, delivered earlier on Tuesday, in which he said the center-right government has increasingly less time for key reforms.

"This year, we would hope, and that's in the government's stated plans or drafted specific plans, that hearings in the Seimas could be expected in the fall," Simonyte told journalists.

Among the key planned proposals, she mentioned bills on climate change, the innovation reform, a national agreement on education, a reform of the state service and a review of tax credits.

"Whether or not they will be adopted in the Seimas, that's a different question," the prime minister said.

In his annual address, the president said the ruling block is wasting time on non-essential issues.

"Experience shows that the window in the political agenda for delivering education, health, taxation, cultural, and other reforms of national significance is rather small," the president said. "And it is narrowing as time is wasted in arguments over electoral procedures or the extension of alcohol sales by five hours per week. A year from now, when I deliver the next state of the nation address, that window will be almost completely closed, while most of you will be immersed in a mood of upcoming elections."

Lithuania is scheduled to hold municipal elections in 2023 and a general election in 2024.

In response to the president's criticism, the prime minister said there's constant contact between municipalities and the central government.

Simonyte also paid attention to fragmentation in the society and a poor post-pandemic emotional state, which was highlighted by the president.

"I would hope it will also evolve into the president's work," she said.