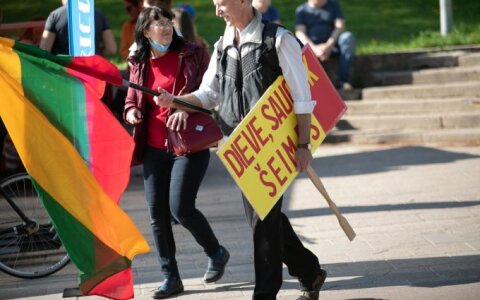 Vilnius Municipality has refused to issue a permit to the organizers of the Family Defense March to hold another rally in mid-June, Mayor Remigijus Simasius said on Friday.

The organizers were denied the permit because the first rally held in mid-May showed that this is "a political festival" whose participants failed to follow the coronavirus lockdown rules, according to the mayor.

"This is no protest and constitutional right to realize one's political views; this is a political festival," Simasius told LRT Radio.

"We can't permit this festival to continue during the lockdown, [given that] the organizers themselves walk around without masks and don't follow the rules," he said.

While the first Big Family Defense March had clear "elements of protest" against some bills that were under debate in the parliament at the time, now "there's nothing to protest against", according to the mayor.

Around 10,000 people from all over Lithuania gathered in the capital's Vingis Park on May 15 to protest against the Istanbul Convention and other initiatives "directed against the traditional family".

The organizers said shortly afterwards that they were planning to hold another really in front of the parliament and the government building in mid-June.