Stoltenberg: NATO is united on Belarus 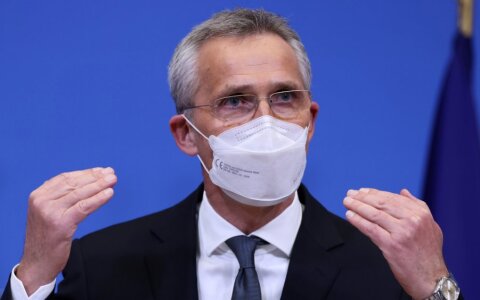 NATO stands united in its condemnation of Belarus' forced diversion of a Vilnius-bound flight from Athens to Minsk, Jens Stoltenberg, the Alliance's secretary general, said on Thursday.

Stoltenberg was asked about the Alliance's unity on Belarus following media reports that Turkey had pushed NATO allies into softening its statement on the incident.

"NATO is united and NATO allies, all 30 NATO allies, agreed a very strong statement last week, where we strongly condemned the forced landing of civilian aircraft on its way from one NATO capital Athens to another NATO capital Vilnius," the secretary general told a joint news conference with Lithuanian Prime Minister Ingrida Simonyte in Brussels.

"This was a very clear and strong political message," he added.

Reuters reported last week that "Turkey pushed NATO allies into watering down an official reaction" to the forced landing of the Ryanair flight and the detention of Belarusian opposition blogger Raman Pratasevich and his girlfriend Sofia Sapiega.

On May 26, NATO released a two-paragraph statement condemning the forcing down of the flight to arrest Pratasevich, but “did not include any punitive steps that Baltic allies and Poland had pressed for," the news agency said.

It noted that the statement was less strident than Stoltenberg's public remarks.

On Thursday, NATO's secretary general also welcomed decisions by the United States, the United Kingdom and the European Union to impose sanctions on members of the Belarussian regime.

"We have to demonstrate that there are costs and consequences when basic international norms and rules are violated," he said.

"Most of the international community reacted promptly and strongly, but this is not the end of the story," she told the news conference. "We should also maintain our pressure on the Lukashenko regime and also on the Kremlin."

Belarus' regime must release political prisoners and allow free, democratic elections to take place in the country, according to the prime minister.

Stoltenberg said that the forced diversion of the passenger plane would be discussed at NATO's summit in mid-June, too.

During their meeting in Brussels, Simonyte and Stoltenberg also discussed security challenges, NATO's presence in the region, and Lithuania's contribution to the Alliance.

The prime minister noted that the region is facing new threats and challenges, including hybrid and cyber ones.

"We see the situation as a little bit of a paradox," the prime minister told the news conference.

"On one hand, Lithuania has never been safer than it is now, being a member of so many strong international organizations, NATO, the EU [and] the OECD, but on the other hand, the situation around us in the region is not only unstable, but also deteriorating, and definitely we need to strengthen our emphasis on deterrence and defense as much as possible," she said.

Simonyte said that Lithuania is taking steps to beef up its security and defense.

"We are meeting the 2 percent [of GDP defense spending] criteria," the prime minister said at the news conference. "The government has an even more ambitious plan for the next 10 years".

"We understand that our security, first and foremost, is our own responsibility. So we need to do as much as we can ourselves and do even more together with our partners,” she added.

Speaking about Russia, Stoltenberg noted NATO's dual-track approach to the country, combining deterrence with dialogue on the future.

"I am looking forward to welcoming president Biden to Brussels. I am confident that when we meet, we will discuss a wide range of issues, including NATO relations with Russia," the secretary general said.

"Then I welcome that Biden, after meeting NATO leaders, will travel on and meet with president Putin. It is in line with NATO's dual track approach."

"We need deterrence, defense, but also dialogue, when it comes to Russia," he added, noting that this would help ease tensions between the West and the Kremlin.

Stoltenberg: NATO is united on Belarus