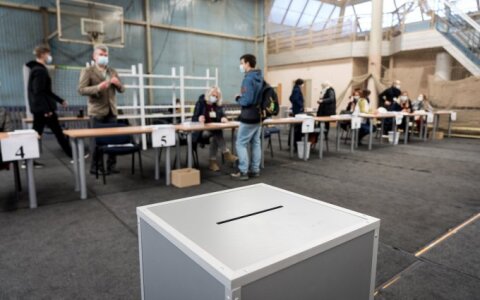 Almost two thirds of Lithuanian residents are inclined to back a cap on mayoral terms, a new survey by Vilmorus for BNS has revealed.

The survey asked one thousand Lithuanian residents whether the number of mayoral terms should be limited.

64.2 percent of the people surveyed backed such restrictions, and 22 were against. 13.9 percent were undecided.

The results reflect the population's general distrust in politicians and the wish for change, Associate Professor Mazvydas Jastramskis from the Institute of International Relations and Political Science at Vilnius University told BNS.

"It's been fairly obvious so far. And perhaps it is partly reflected in general elections as the turnover of Seimas members is fairly high, higher than in Western countries on average. And also that voting for new parties and new lawmakers," he said.

Direct mayoral elections were introduced in Lithuania in 2015 and mayors have been directly elected twice already. Before that, the local council would elect mayors.

Lithuania's Constitutional Court ruled in the middle of April that direct mayoral elections could not be held without prior changes to the Constitution. The ruling will come into force on May 3, 2023, when the term of incumbent directly-elected mayors expires.

There are now two bills on constitutional amendments drafted in the parliament. The ruling conservative Homeland Union – Lithuanian Christian Democrats and the Liberal Movement propose giving directly-elected mayors executive powers, and the opposition and the Freedom Party, part of the ruling block, want to preserve the existing model when mayors chair local councils and also have the right to propose heads of administration.

The survey's exact results are the following:

The question: "Whether the number of mayoral terms should be limited?"