Vilnius born French author Romain Gary: reading his works you switch from tears to laughter in the same sentence 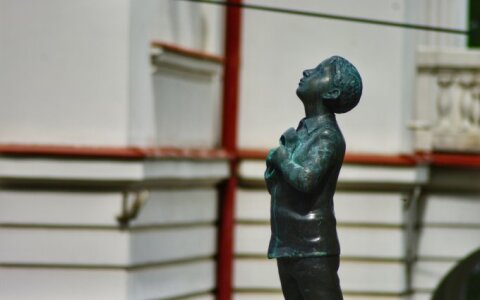 Romain Gary is a famous French author born in Vilnius in 1914 under the name Roman Kacew. French pupils study his works at high school. In Lithuania, he has been gaining popularity for the last 10 years, mainly through the construction of a monument and archival discoveries.

Romain Gary is the only French writer awarded twice with the Prix Goncourt (prize in French literature). Usually, you can only win it once. As Loïc Salfati, vice-director of the French Institute in Lithuania, expresses: “It sets the mood.”

The French writer was born in Russia: in 1914, Vilnius was part of the Russian empire. Then he grew up in Poland because Vilnius became Polish. Therefore, according to L. Salfati, the history linking Romain Gary to Vilnius is Russian and Polish history – not a Lithuanian one. For him, it is also a reason why he is not as famous as he could be today.

But for R. Ramanauskas, a Lithuanian actor and president of the Romain Gary Club (Vilniaus Romain Gary Klubas), Gary is definitely Lithuanian: “In Lithuania, and in Vilnius, a writer of European and even World scale was born. Well, not just a writer: he was also a movie person, making movies and liking movies, a diplomat, an aviator, and so on.” 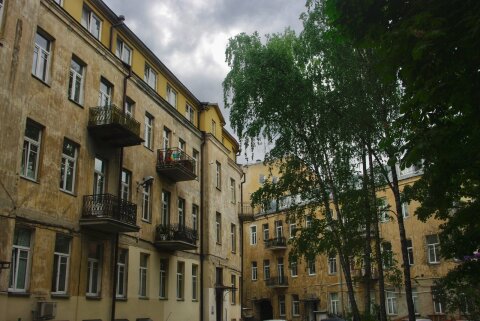 Romain Gary (nuotr. Clara Delcroix)
Related articles
French correspondent in Baltics: sometimes, Lithuania becomes the country where you first set foot in Europe
Lithuanian-born singer from France GiedRé: at some point, you have to come back to granny's piano

“Romain Gary is one of the only French writers left from the 60s and 70s,” expounds L. Salfati. “Many French writers from this generation are now forgotten. Who is left today? Merely Albert Camus and Romain Gary, by exaggerating a bit. It is quite strange because, in their time, the literary critics did not appreciate them so much.”

He continues: “In Lithuania, Gary was discovered fairly late. Until independence, he was known in literary and intellectual circles because he was translated into Russian.” R. Ramanauskas indeed discovered the author at the end of the 90s through ‘Inostrannaya Literatura’, a Moscow magazine about world literature.

The actor describes, “In Soviet times, we knew almost nothing about him. He was held back from the public because of being ironic about the Bolsheviks and the different regimes [laugh]. Hence he was no friend of the Soviet Union.”

After the independence, the French Institute shaped a policy to translate Gary into Lithuanian. Around this time, R. Ramanauskas came across the novel ‘Promise at Dawn’ in Polish and Russian. Straight away, he fell in love with it: he spent his childhood in the same streets, but 30 years later, in the 50s.

He emphasizes, “It was so touching… to the point of tears! Gary’s childhood in Vilnius profoundly reminded me of mine.” L. Salfati adds, “When you read Romain Gary, you switch from tears to laughter in the same sentence. He spoke his mind out, often with humour – a kind of dark humour, or cynicism. With Gary, you never know where is the truth and where is the hoax. 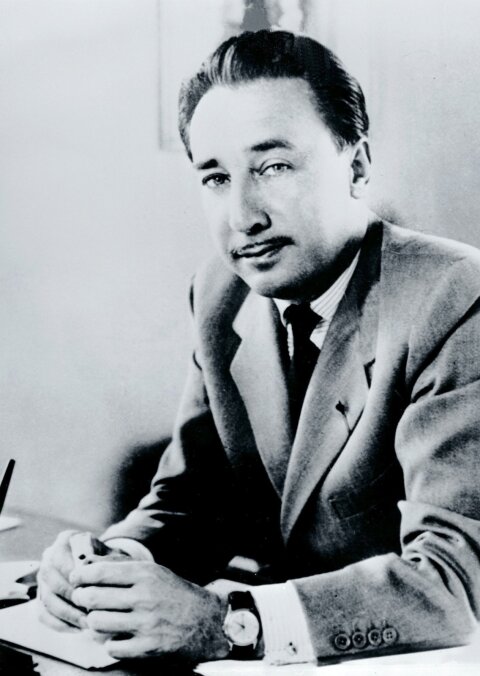 He could write about complex and sensitive topics in a simple way and with great perspective. He was a visionary but never a backseat driver. You feel close to him when you read him.” He resumes, “Well, not everyone has the same affinity with Romain Gary.”

R. Ramanauskas started the Romain Gary Club in 2003 after he came up with an idea: building a monument dedicated to the writer. It was easier to apply as an official organization. Building a statue in a public space undergoes a strenuous process. R. Ramanauskas details: "There is a lot of bureaucracy: many different signatures required, all sorts of meetings, permits, and so on."

In 2007, the actor contacted the Office of the Chief Archivist of Lithuania to find out information about Gary's childhood's house, where he lived with his mother. The archivist Inga Bumažnikova helped him, studied the house registers of Wielka Pohulanka №16 (nowadays J. Basanavičiaus 18). The statue now stands at the corner of J. Basanavičiaus and Mindaugo streets. It is pretty well known to Lithuanians, according to L. Salfati. 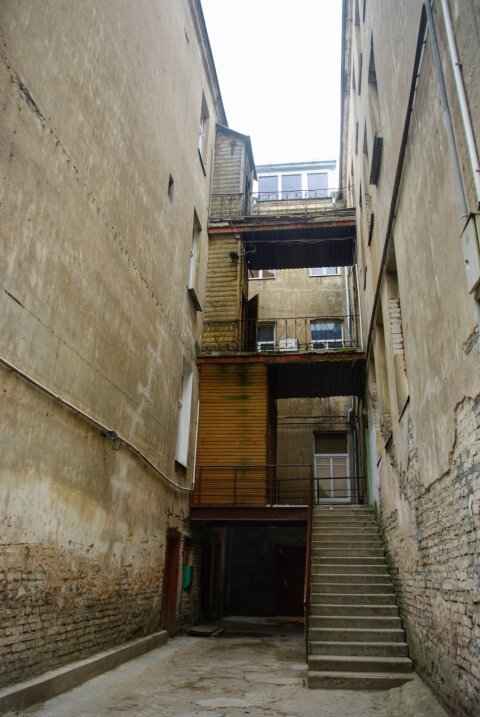 In 2014, the French Institute held many events about Gary for the centenary of his birth and even produced a web documentary about him. That same year, the journalist Edita Mildažytė consulted the archives because she was working on a documentary about the French author: ‘Ištesėtas pažadas. Vilniaus paslaptys’ (A fulfilled promise. Secrets of Vilnius.)

At the archives, Elžbeta Šimelevičienė was in charge of this request. She explains, “Edita Mildažytė was interested in the house registers, where Romain Gary lived with his mom. They are in Polish, as Vilnius was a part of Poland at that time. After studying all the records, I realized that more documents on Roman Kacew (Romain Gary) and his mother should be kept in our archive. I managed to find all of them: passports, photos, his birth certificate, the marriage certificate of his parents, etc.”

Using these documents, E. Šimelevičienė wrote an article: Romain Gary and his family are part of Vilnius history (Romain Gary ir jo šeima - Vilniaus istorijos dalis). She was surprised, “For me, the biggest discovery about Gary was all his documents and the sheer fact that they had not yet been published anywhere.”

Today, most of his novels are available in Lithuanian. But R. Ramanauskas and L. Salfati agree on one point: more people need to remember Gary. The vice-director of the French Institute is pleased, “For about 10 years, Romain Gary has enjoyed increasing popularity in his hometown. We introduced Gary to Lithuanians, and eventually, he somewhat became their own.” 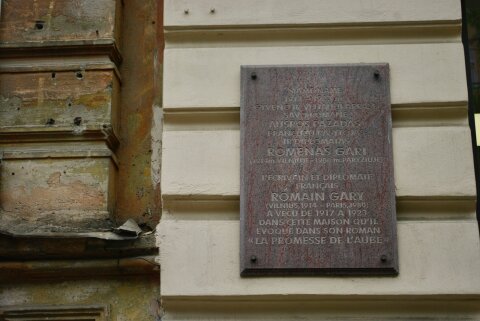 On his side, the Lithuanian actor explains, “In my opinion, Gary is such a typical Vilnius person. He is essential, not only for us but for the world in general, because he expressed very humanistic ideas, through metaphor, through allegory, through fantasy… I think more people need to remember him.”

Is there anything left to discover about Romain Gary and his hometown of Vilnius? L. Salfati jests: “Oh well, there are always things to discover with Romain Gary! The deeper you study him, the higher you are surprised by what you can discover. That is what makes this character so interesting! He is a chameleon, someone who is always where you do not expect him to be.”

The French author is a recurring theme for events of the French Institute. Recently it invited François-Henri Désérable, a French author who wrote a fake biography of Romain Gary under the title ‘Un certain M. Piekielny' [A certain Mr Piekielny; one of Gary’s neighbour in Promise at Dawn].

In 2017, Promise at Dawn was also adapted into a movie, starring Pierre Niney and Charlotte Gainsbourg. The French Institute worked with its director, Éric Barbier, who came to Vilnius to understand the city, to appreciate better how to direct the movie. When asked if there is anything he would like to add, Loïc Salfati smiles, “Well yes: you can tell that 'Promise at Dawn' is a book to read!”

Vilnius born French author Romain Gary: reading his works you switch from tears to laughter in the same sentence