Midsummer in Lithuania: what the upcoming Joninės will be like 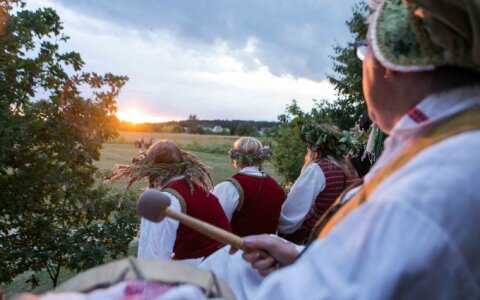 Joninės, or Rasos, is the midsummer festival celebrated in Lithuania. This year it will take place on the 24th of June. Although being related to the Christian celebration of Saint Jonas, it originates from old pagan traditions.

Inija Trinkūnienė, the spiritual leader of Romuva (an indigenous Lithuanian faith community), explains that, on that day, people celebrate the prosperity and flowering of Mother Earth and all life. As the celebration happens around the summer solstice, she adds: “Of course, it is connected with light: the sun is on its top!”

Two names for one celebration may seem strange. Inija Trinkūnienė clarifies: “It’s the same day, just the name changes. The appellation Joninės is an adaptation of the ancient festival of Rasos, which is the real essence of the celebration.” This festival is also famous in Latvia, under the name of Lyguo.

At the Rumšiškės Ethnic Open Air Museum, Joninės, or Rasos, used to be celebrated as an educational program. But last year, an attempt has been made to revive an older tradition and celebrate it according to the traditional scenario, with bonfires and night rites.

The museum divided the festival into two parts, to interest not only tradition lovers, but also young people, that is a larger audience. The first part included folklore, traditions, and customs. And the second modern part consisted of atmospheric music, which intertwined elements of folklore and modern sound.

However, due to the pandemic situation in the country and the uncertainty, Kernavė Archaeological Reserve cancelled its celebration in 2020. Usually, the major festival is organized in this ancient Lithuanian capital, welcoming around 10,000 participants.

“In 1967, Rasos was organized here for the first time according to the archaic customs of the Baltic tribes, restored based on written sources (existing since the 14th century), folklore and ethnographic data, and research. From this activity initiated by the Romuva movement, the Lithuanian folklore movement grew”, explains Ieva Lazauskė, communication and event organizer at Kernavė.

She pursues that nowadays, the celebration takes place according to the established order from the beginning of this celebration: "Hubs with torches and wreaths are erected on the mounds, an altar and a gate are built. Participants gather medicinal plants and herbs, weave wreaths, ceremonial fire is lit at the altar, ancestral spirits and deities are honored, accompanied and greeted by the rising sun, at midnight sung and danced by the bonfire.”

Inija Trinkūnienė details some symbols of the event. The wreath is related to flourishing nature, well-being, and prosperity. She adds: “When there is a wedding ceremony in the summer period, it is the same: the bride also wears this wreath of flowers.” 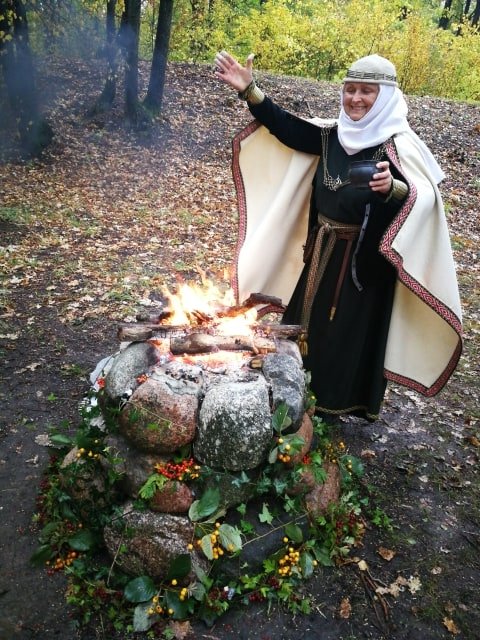 The fire means the continuation of daylight. It’s also a symbol of unity, as it stands in the center of the celebration and people dance around it. Inija Trinkūnienė states: “Many rituals are devoted to the sun. Songs are sung in the evening to say goodbye to it (or her, as the sun is feminine in Lithuanian). And then, in the morning, if not going to the night celebration, people are waiting for the rising sun and sing special songs for the sun.”

For Ieva Lazauskė, “the ceremonies of the festival [at Kernavė] focus on the sun, fire, water, vegetation, which at that time acquire the greatest powers and transmit it to mankind.”

This year, it is still uncertain what the celebration will resemble. Inija Trinkūnienė expects the events to be better than last year: in the open area, it is easier to keep a safe distance between participants.

This year - face-to-face celebration in Rumšiškės

Ingrida Stundžė from the Rumšiškės Ethnic Open Air Museum is pleased to announce: “We get a lot of inquiries and interest in what the upcoming Joninės will be like. Subject to mitigating quarantine and mitigating restrictions, we plan to celebrate Rasos/Joninės face-to-face. Joninės festival last year inspired us to choose a similar format this year, only to expand the night program even more: it will continue until sunrise.”

More information about the festival at the Rumšiškės Ethnic Open Air Museum will be posted later. Unfortunately, the situation differs at Kernavė. Ieva Lazauskė points out, “Since it is difficult to control the flow of people and contacts during the celebration of Rasa, the normal event will not happen this year either.”

Nevertheless, she describes what the upcoming celebration will look like. “There will be pre-filmed and live streaming videos on YouTube and Facebook about Rasa’s traditions, customs, and history. On the eve of the Rasa Festival, we will once again prepare a small bonfire for the local folklore group Medgrinda, but we do not organize any mass fairs or collective events.” 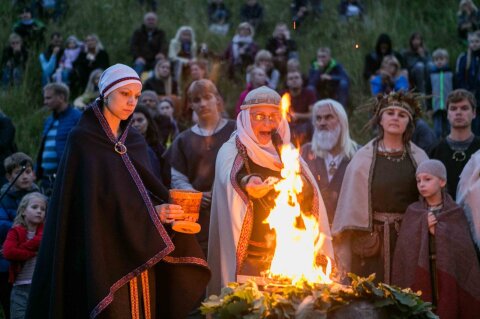 When asked why it is meaningful to keep celebrating such an old tradition, Inija Trinkūnienė asserts: “It’s the essence of our identity! The tradition is unbroken. We are trying to keep it alive. When you do such rituals, which your ancestors were doing hundreds and thousands of years ago, you feel the importance of those actions.”

Ingrida Stundžė claims, “This is one of the most important traditional calendar festivals, wrapped in various beliefs, customs, ritual actions.” Ieva Lazauskė pursues, “It is so important to continue this celebration not only for our generation but for our children to remember their traditions in a time where traditions are disappearing from our life.”

Finally, Inija Trinkūnienė suggests, “All the Lithuanian country, all the land, is full of ancient sacred places: sacred grass, sacred hills, sacred trees, sacred springs, and so on. It inspires people who are living here to follow ancient traditions.”

Midsummer in Lithuania: what the upcoming Joninės will be like