Some of Ryanair's questions to Belarus 'make you gasp' – Lithuanian minister 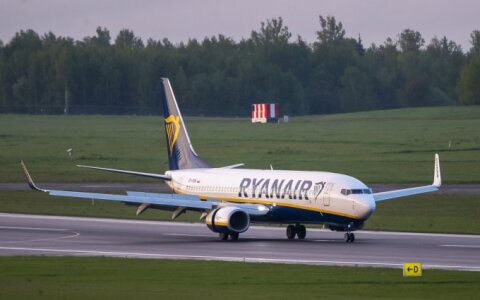 Some of Ryanair CEO Michael O'Leary's questions to Belarus' authorities about Sunday's forced landing of the airline's flight in Minsk are "very interesting and even make you gasp", Lithuanian Transport Minister Marius Skuodis said on Thursday.

"We keep getting explanations every day. I myself have seen some very interesting questions by Ryanair's CEO which really make you gasp," Skuodis told LRT Radio.

"Ryanair is putting a lot of questions to the responsible authorities, [such as] if there was an explosive on the plane, why it was instructed to land in Minsk Airport, near the passenger terminal, rather than in a remote location," he said.

Ryanair is also asking, among other things, why the flight's passengers were not urgently evacuated, why their luggage was only checked by sniffer dogs, rather than by special equipment, and why the crew and passengers were not given any answers for six hours, according to the minister.

"There're a lot of specific details here. We'll see what the organization answers. Various actions are possible," the minister told the radio station.

"In this case, the most important thing for us is that an international investigation [is conducted] and all answers are answered, including about the whereabouts of the five passengers," he said. "We know that two of them have been jailed, even though they flew legally between two EU member states."

The Ryanair flight, scheduled to arrive in Vilnius at 1 p.m. on Sunday, was forced to change course just before crossing into Lithuanian airspace.

According to the Irish airline, the flight with more than 100 passengers aboard made an emergency landing in Minsk after being notified by Belarus' air traffic controllers of "a potential security threat on board", but "nothing untoward" was found.

Five of the passengers who boarded the flight in the Greek capital did not arrive in Vilnius after the aircraft was allowed to continue its journey to the Lithuanian capital.

Two of the passengers, Belarusian opposition activist and blogger Raman Pratasevich and his girlfriend Sofia Sapega, a Russian citizen and student of Vilnius-based European Humanities University, were arrested after their flight landed in Belarus' capital.

Some of Ryanair's questions to Belarus 'make you gasp' – Lithuanian minister