Lithuanian, EU formins to discuss response to events in Belarus 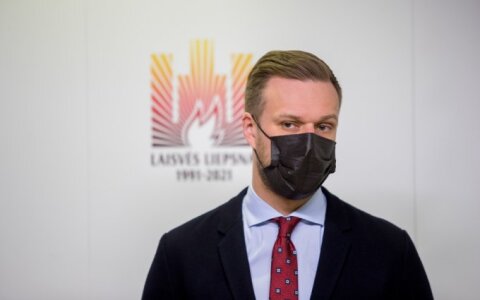 Lithuanian Foreign Minister Gabrielius Landsbergis is leaving for Lisbon on Wednesday to attend an informal meeting of EU foreign ministers to discuss a response to the recent forced landing of a passenger plane in Minsk and the detention of opposition activist Raman Pratasevich.

The meeting is being hold by Portugal which now holds the rotating EU presidency. The meeting will also focus on frozen conflicts in the Eastern Partnership region. Ministers will discuss the EU's further involvement in pursuit of long-term and sustainable solutions.

"All eyes are on Belarus recently but we cannot not to see Russia's destructive role in the Eastern neighborhood and in all frozen conflicts in the region. Although Russia positions itself as a mediator, it is in fact a participant and initiator of these conflicts, seeking to maintain its influence in the region at any cost. Therefore, the EU's role in Eastern neighborhood countries should be strengthened," Landsbergis said.

Last Sunday, a Ryanair flight en route from Athens to Vilnius changed course just before crossing into Lithuanian airspace and was diverted to Minsk where it landed.

The airline said the flight made an emergency landing in Minsk after being notified by Belarus' air traffic controllers of "a potential security threat on board" but "nothing untoward was found".

Belarus also scrambled a fighter jet and a military helicopter.

Belarusian opposition activist, blogger and founder of the Nexta information channel Raman Pratasevich was detained after the plane landed in Minsk, alongside his girlfriend Sofia Sapega, a Russian citizen and student of the Vilnius-based European Humanities University.

EU foreign minister will also discuss the EU Strategy for Cooperation in the Indo-Pacific and the EU's relations with Africa.

EU ministers will also meet with Jordanian counterpart Ayman Safadi and discussed the situation in the Middle East and ways to ensure peace and stability in the region.

Lithuanian, EU formins to discuss response to events in Belarus