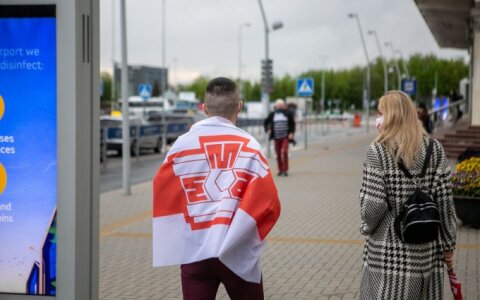 The recent forced landing of a plane, en route from Athens to Vilnius, in Minsk is an impertinent attack that posed threat to people's lives and violated the norms of international law, Lithuania's State Security Department says.

"The SSD considers the forced landing of a civilian aircraft with Lithuanian citizens and citizens of other countries in Minsk to be an impertinent attack that poses threat to people's lives and violated international legal norms," the SSD said in a comment sent to BNS.

"The SSD continues to work with other state institutions and international partners to collect all possible and trustworthy information about the Belarusian regime's caused very grave incident, is assessing information and providing it to decision-makers and is also performing all functions entrusted to the department by law," the department said.

The Ryanair flight en route from Athens to Vilnius changed course just before crossing into Lithuanian airspace and was diverted to Minsk where it landed on Sunday afternoon.

The airline said the flight made an emergency landing in Minsk after being notified by Belarus' air traffic controllers of "a potential security threat on board" but "nothing untoward was found).

Belarusian opposition activist, blogger and founder of the Nexta information channel Raman Pratasevich was detained after the plane landed in Minsk, alongside his girlfriend Sophia Sapega, a Russian citizen and student of the Vilnius-based European Humanities University.

Last year, Belarus put Pratasevich, 26, and Sciapan Pucila, 22, a co-founder of the Nexta channel, on the list of persons engaged in terrorist activity and also declared the channel to be extremist and ordered to block it.

According to Lithuania's authorities, 171 passengers were aboard the Ryanair flight, including 94 Lithuanian, 11 Greek and nine French nationals, and a number of citizens of Belarus, Poland, Romania, Germany, Latvia, Russia, Georgia and other countries.

The flight returned from Minsk to Vilnius on Sunday evening.

Former Belarusian Culture Minister Pavel Latushko, a member of the presidium of the Belarusian opposition Coordination Council, says six people, including two Belarusian and four Russian citizens, did not return to Vilnius from Minsk on the Ryanair flight.

Leaders of NATO, the European Commission and some EU member countries have condemned the incident.