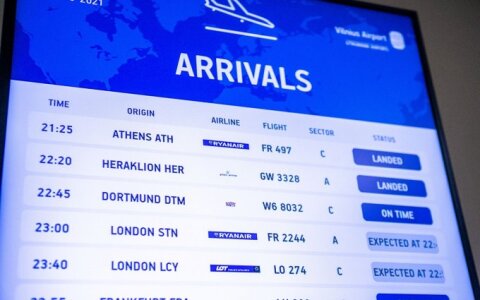 The Lithuanian, Latvian and Estonian presidents have condemned the forced landing of a Ryanair passenger plane in Minsk on Sunday.

"The Belarusian regime grossly violated international law and risked the lives of more than one hundred people. This state-backed terror attack posed threat to the safety of international civil aviation, and we must respond accordingly," Nauseda was quoted as saying in a statement.

The Lithuanian president urged his Latvian and Estonian counterparts to jointly seek a common EU and NATO response to actions of the Belarusian regime.

The three Baltic leaders agreed to demand that the Belarusian regime respected Raman Pratasevich's rights and released him immediately, the statement reads.

According to the Lithuanian president, the airspace above Belarus should be declared unsafe and planes of this country should not be allowed to enter the EU airspace. An independent international probe into the unprecedented plane hijacking should also be carried out.

The Ryanair flight en route from Athens to Vilnius changed course just before crossing into Lithuanian airspace and was diverted to Minsk where it landed on Sunday afternoon.

The airline said the flight made an emergency landing in Minsk after being notified by Belarus' air traffic controllers of "a potential security threat on board" but "nothing untoward was found).

Belarusian opposition activist, blogger and founder of the Nexta information channel Raman Pratasevich was detained after the plane landed in Minsk, alongside his girlfriend Sophia Sapega, a Russian citizen and student of the Vilnius-based European Humanities University.

Last year, Belarus put Pratasevich, 26, and Sciapan Pucila, 22, a co-founder of the Nexta channel, on the list of persons engaged in terrorist activity and also declared the channel to be extremist and ordered to block it.

According to Lithuania's authorities, 171 passengers were aboard the Ryanair flight, including 94 Lithuanian, 11 Greek and nine French nationals, and a number of citizens of Belarus, Poland, Romania, Germany, Latvia, Russia, Georgia and other countries.

The flight returned from Minsk to Vilnius on Sunday evening.