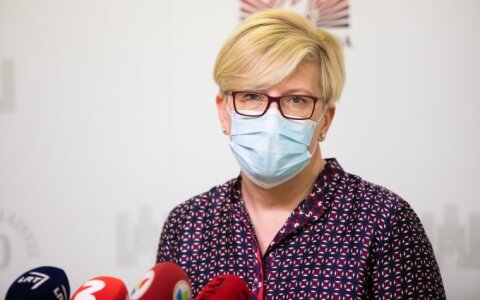 Lithuanian Prime Minister Ingrida Simonyte has written to President Gitanas Nauseda this week, inviting him to agree on who of them should take part in the European Council's meeting ahead of each summit.

"I informed the president of my opinion some time ago. Since my meeting with the president did not take place on Monday, I informed him additionally in writing this week," Simonyte told reporters on Thursday.

"In my opinion, it's possible to agree before each summit, given its content, on whose representation in that meeting would bring more value to Lithuania," she added.

The prime minister said she had not yet received a response from the president's office.

Asked how much it was important for her personally to attend the EU summits, Simonyte said that “the question is wrong, it is not something relevant for me, for Simonyte or Nauseda, it is the issue of inter-institutional framework and logic”.

“Some time in the past, EU Council meetings were rather infrequent and the issues discussed could be more clearly divided by content into a very clearly economic domain and a very clearly geopolitical one. Now, with the EU integration getting deeper and with the number of joint decisions ever increasing, the agendas start to feature numerous internal policy issues,” she said.

Simonyte said that she was aware of the opponents’ argument that it was the president who represented the state, but pointed out that “prime minister represents the government” while members of the European Council “are the heads of state or government, which should not be forgotten”.

“However, I believe that it is possible to reach an agreement within the framework of our Constitution,” she added.

Ridas Jasiulionis, spokesman for Nauseda, told BNS that he would inform about the president’s stance on the committees’ call and the prime minister’s letter later on Thursday.

On Wednesday, the parliamentary committees on European and foreign affairs urged Nauseda and Simonyte to agree on who of them should go to the next EU summit.

In a statement, the committees called on the two leaders to "join forces and agree on the most appropriate representation of Lithuania" before the next EU summit in June, "taking into account issues discussed at the European Council's meetings".

The conservatives mentioned earlier that a special law could be passed to allow sending the prime minister to EU summits, too.

The initiators say the prime minister should go to EU summits because the bloc's leaders mostly discuss issues falling within the government's remit and because it cannot be ensured the president adheres to the mandate approved by the Seimas and the government. They also note that the president does not participate in European political parties' activities.

Critics, meanwhile, maintain that the Homeland Union are using double standards in a bid to expand their influence, saying that the conservatives let President Dalia Grybauskaite take their place at the European Council and it is only now that they began to raise the issue.

Nauseda has said he will continue to represent Lithuania at all summits.