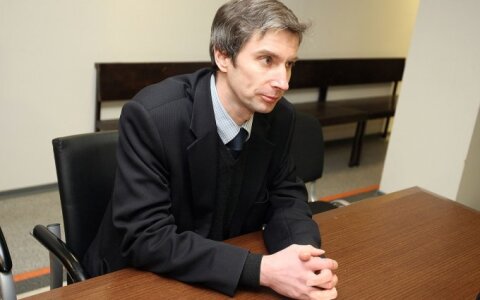 Siauliai Regional Court on Wednesday plans to move on to hearing the closing arguments in a case in which Algirdas Paleckis, a former Lithuanian politician, is accused of spying for Russia.

Vytautas Joncas, a representative for the court, told BNS that prosecutor Vilma Vidugiriene representing the public prosecution before the court intended to deliver her closing arguments remotely. The accused and their lawyers were expected to arrive to the courtroom.

The two accused – Paleckis and Deimantas Bertauskas, a businessman, – are standing trial on charges of spying for the benefit of a foreign country in an organized group. While the latter admits his guilt, the former politician denies any wrongdoing, saying he was conducting a journalistic investigation.

The Lithuanian Court of Appeal in early March referred the case to the Siauliai court after Vilnius Regional Court recused itself from hearing it.

According to the Prosecutor General's Office, the defendants, acting in an organized group with a Russian intelligence officer and other Russian citizens, including one found guilty in the January 13, 1991 crackdown case, allegedly collected information of interest for Russian intelligence in Lithuania between February 2017 and October 2018 for monetary and other remuneration.

Prosecutors say the defendants were also tasked with collecting information on officers and judges who worked on the January 13 case in Lithuania, and on other cases related to Russia's aggression in Lithuania in 1990-1991.

Among other things, the defendants allegedly had to find people working for Lithuanian institutions who would agree to provide false information to Lithuanian law enforcement institutions about the health state of Yuri Mel in exchange for unlawful monetary remuneration, in an attempt to replace his detention with a milder measure of restraint or improve his detention conditions.