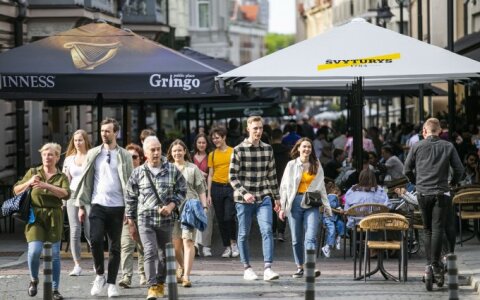 The Lithuanian government will on Wednesday consider allowing shopping malls to open on weekends and lengthening the opening hours of bars and cafes.

Prime Minister Ingrida Simonyte confirmed that to reporters at the Seimas on Tuesday without specifying the proposals, however.

“The government will decide tomorrow and there will be a decision. I have not seen the draft but we had a discussion on this issue and I hope that there will be proposals put forward,” she said.

Simonyte did not rule out that the agenda of the Cabinet’s meeting might also include proposals on contacts between two or more households.

Following several months of stringent lockdown, the government allowed all shops located in malls to reopen from April 19, which was followed by the reopening of stores and stalls in covered markets and other public places from May 3. However, stores are still not allowed to open on weekends.

Starting from April 22, the Cabinet allowed outdoor cafes, bars and restaurants to operate from 7 a.m. until 9 p.m., with no more than two persons allowed at a table outdoors, excluding families.