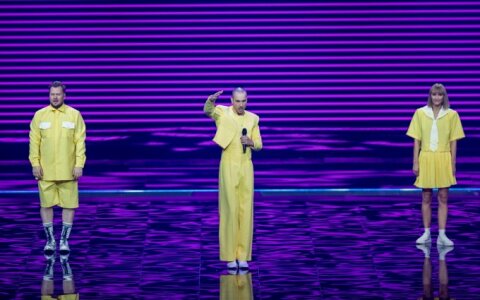 Lithuania’s The Roop are opening the first semi-final of this year's Eurovision Song Contest with their song "Discoteque" on Tuesday night.

"We did everything well. Even the cameras did everything well, and the lighting technicians and everyone else did their job," Vaidotas Valiukevicius, the band's leader, told Lithuanian journalists after one of Monday's two dress rehearsals.

The second dress rehearsal was watched by the jury who cast half of the votes. The other half will be cast by TV viewers.

"This is why this night is just as important," Valiukevicius said on Monday.

The second semi-final will take place on Thursday.

The top ten entries from each semi-final will qualify for Saturday's final.

The 65th edition of the Eurovision Song Contest is being held in Rotterdam under strict coronavirus precautions.

The Roop won Lithuania's national Eurovision selection last year, too, but the contest was cancelled due to the pandemic.