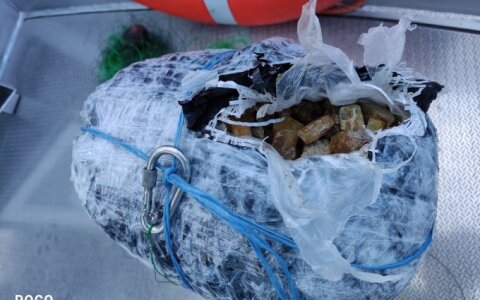 Lithuania’s border guards pulled a bundle containing 15.4 kilos of smuggled amber from the River Nemunas near the village of Bitenai in the western municipality of Pagegiai on Thursday night.

The State Border Guard Service reported that officers of the Bardinai Border Guard noticed a suspicious object in the river and used the patrol boat to inspect their discovery. They found a bundle, which was wrapped in polyethylene and had a thick fishing line stretching from the territory of the Kaliningrad region on the opposite bank of the river attached to it.

It is believed that smugglers used the line to control the movement of the bundle.

The border line goes through the middle of the river in this section of Nemunas.

“There are no doubts that smuggled amber was put into the river on Russia’s side and was supposed to reach Lithuania’s bank across the river,” the border guard service said in a press release.

The service notified Russia‘s border guards about the incident.