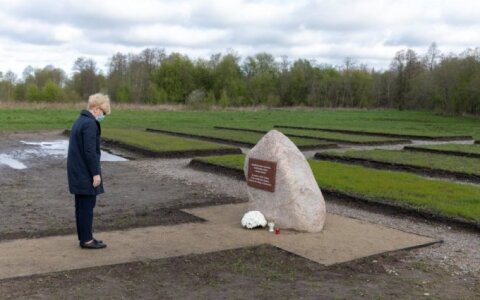 "The fate of people who were imprisoned, maimed and killed in Nazi and Soviet concentration camps are a painful reminder for us that totalitarian regimes do not choose victims based on their nationality, profession or any other criteria. These regimes carried out crimes against humanity," the prime minister was quoted as saying in a statement released by the government.

Camps for war prisoners were operated by the Nazi and Soviet totalitarian regimes in Macikai for 15 years, using the same building and infrastructure. Citizens of more than 20 countries were imprisoned here.

In 1945, the Soviet government also established a gulag in Macikai and imprisoned Lithuanian citizens, including clergy, representatives of the areas of culture and education, supporters of the resistance movement, disobedient farmers, people who fled deportation, as well as women and their children who were born in the gulag, until 1955.

The majority of Macikai victims died of inflicted sufferings or were murdered. They mass burial sites are found in different areas of Silute District up to this date.