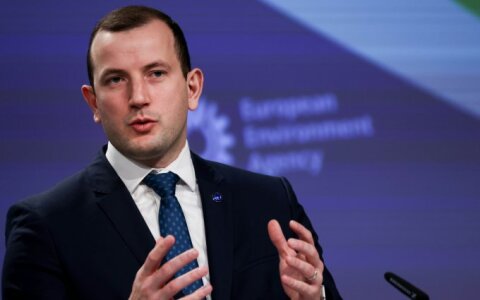 As Lithuania plans to submit its economic recovery plan to Brussels slightly later, in the middle of May, Lithuania's delegated European Commissioner Virginijus Sinkevicius, in charge of environment, says the European Commission has no strict deadline for submitting such a plan.

In his words, Lithuania is not the only EU member state that plans to submit its plan in the middle of May, with some countries planning to do so in late May or early June.

"There's no strict deadline. The Commission's priority is to have a plan of good quality. We now have 14 countries that have already submitted their plans, and also a group of countries, including Lithuania, that have said they will do so in around the middle of May," Sinkevicius told BNS on Thursday after his meeting with the Lithuanian prime minister and the finance minister.

"Five countries have informed they will even do that in late May or early June, and in this case, the Commission has no strict deadline for submitting the plan. Its quality is key and also for the plan to be comprehensive and take into account Europe's recommendations, and include a clear vision and direction," the EU commissioner said.

In his words, the plan should not only reflect new challenges and goals, including the Green Deal and digitalization, but also deep-rooted problems.

"First of all, it should reflect the dual transition, i.e., the Green Deal and digitalization. And very specific proportions of 37 and 20 percent are given. And with no doubt, we need to pay attention to deep-rooted problems that need reforms, I'm talking about education, social policy and innovation policy," he said.

According to Sinkevcius, the EC will spend two months looking into the submitted plans and some parts might be amended. After that, the Commission will give its response to member states on their plans.

The EU Recovery and Resilience Facility earmarks a total of 2.225 billion euros in grants for Lithuania.