Simonyte: relations won’t change until existing regime is in Kremlin 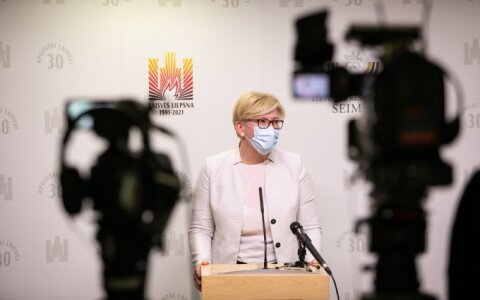 No changes in relations between Russia and the Baltic states should be expected until the existing regime is in the Kremlin, Lithuanian Prime Minister Ingrida Simonyte says.

According to Polish Prime Minister Mateusz Morawiecki, Russia, not other countries, initiated the cooling of relations with other countries with its threatening imperialist policy towards neighbors, therefore, specific measures are needed to bolster security in the eastern flank of NATO and the European Union.

"We have no illusion that we can expect some miracle and some change until that regime is in the Kremlin as its goal is not only to raise tensions but to raise tensions between our two states and the European Union, to question EU values but at the same time keep their assets in EU countries, bring their mothers-in-law and children for medical treatment, i.e., to make use of all of those achievements. (…) That's cynical and manipulative," Simonyte said during a joint press conference with her Polish counterpart in Vilnius.

"Therefore, our task, especially having our geographical location in mind, to bolster oneself and others, as well as the democratic world's response to all non-democratic efforts," she added.

Simonyte also noted that's not the first time that Russia's actions are raising tensions in the region.

"It's not the first time we feel increased tensions. We had Georgia, we had Crimea, we had other episodes when some people had an illusion. We have always had little of it. And that's due to our historic experience. For the very same reasons our Commonwealth of the Two Nations and its Constitution could not blossom the way it was worth it," the Lithuanian prime minister said.

Morawiecki said NATO and other Euro-Atlantic organizations are a good response to Russia's aggressive actions.

"Our strong voice, which is heard across Europe and in other NATO capitals, is loud and is heard. We are convinced that we need to not only step up rhetoric but also take specific action to bolster security in the eastern flank of NATO and the European Union. It was not us who initiated the cooling of the relations (with Russia – BNS). We cannot allow human rights to be violated, aggression and hybrid attacks to happen and threats with violence to be made," the Polish prime minister said.

Lithuania and Poland's attitude are very similar when it comes to the evaluation of threats from the East, Morawiecki said. Both prime ministers stressed the need for cooperation in the areas of security and defense.

"We have actively cooperated so far in defending our interests and values, and we've had close contact between our army representatives, defense and foreign ministers. And, really, we do coordinate our actions and attitudes. To tell the truth, we hardly have anything to coordinate, except for some technical issues, as our attitudes are identical," Simonyte said.

He said she started her meeting with the Polish counterpart from the security situation, not the pandemic, vaccination or economic issues. "From things that unite us and we have an absolutely identical attitude to," she said.

Events in Belarus and Ukraine were discussed during the discussion of ways to maintain stability in the region, Morawiecki said.

"We support the Belarusians and Ukrainians in their fight for their security," the Polish prime minister said.

On Sunday, Morawiecki paid a visit to Vilnius and met with Simonyte as Lithuania and Poland mark the 230th anniversary of the Constitution of 3 May and the Mutual Pledge of the Commonwealth of the Two Nations on Monday.

It was his first visit to Lithuania since the start of Simonyte's term and also the first visit this year as the Lithuanian and Polish prime minister held a phone conversation in December.

In Poland, the 3rd of May is a public holiday.

Simonyte: relations won’t change until existing regime is in Kremlin