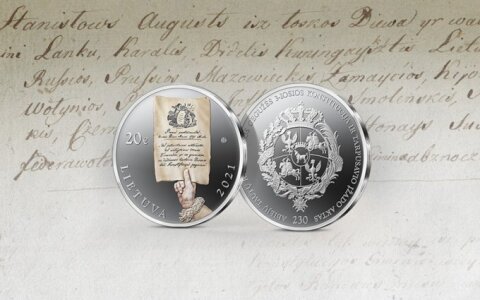 Lithuania and Poland on Monday mark the 230th anniversary of the Constitution of 3 May and Mutual Pledge of the Commonwealth of the Two Nations.

On that occasion, a joint remote festive sitting of the Lithuanian and Polish parliaments will be held in Vilnius and Warsaw. Also, a ceremony will be held in the Royal Castle in Warsaw and a discussion on the future of Europe will be held with regional state leaders.

On the occasion of the anniversary, President Gitanas Nauseda and the First Lady will pay a visit to Poland after Polish Prime Minister Mateusz Morawiecki visited Vilnius on Sunday.

"An extraordinary sitting will be held by the two parliaments. The presidents and the parliament speakers will deliver speeches and we will also discuss resolution adopted by the Lithuanian and Polish parliaments. Awards will be presented," Speaker of the Lithuanian Seimas Viktorija Cmilyte-Nielsen told BNS.

Related articles
Scientists: in Lithuania, populism does not have many features of radicalism
Plan to mark anniversary of May 3 Constitution approved

Four laureates of the Two Nations Awards presented by the Assembly of the Seimas of the Republic of Lithuania and the Sejm and Senate of the Republic of Poland will be welcomed during this anniversary year. The Lithuanian delegation at the assembly decided to give the 2021 ward to writer Kristina Sabaliauskaite and translator Edward Piórko.

The award is presented to people or groups who, through their activity and work, significantly contribute to the cooperation of the two nations. Former awardees include Czeslaw Milosz, Tomas Venclova, Alfredas Bumblauskas etc. The first award was presented in 1999.

An exhibition by the Lithuanian and Polish history museums about the May 3 Constitution will be opened in the Cathedral Square in Vilnius.

On Wednesday, Tomasz Grodzki, marshal of the Polish Senate, is scheduled to come to Vilnius to attend an event about the May 3 Constitution at the Palace of the Grand Dukes of Lithuania