Almost half of Lithuanians disapprove of Istanbul Convention ratification 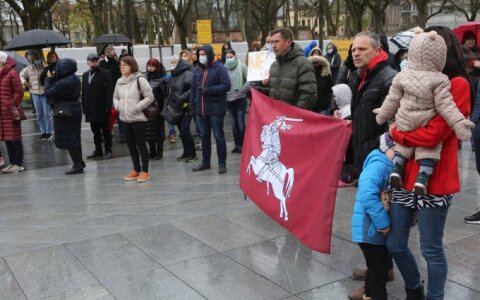 Almost half of the Lithuanian population would prefer if the country did not ratify the Istanbul Convention, according to an opinion poll commissioned by President Gitanas Nauseda's office.

Some 22.1 percent of those polled said they "approve" or "rather approve" of the ratification, and 48.8 percent answered that they "disapprove" or “rather disapprove”. Another 29.2 percent had no opinion on the issue, the Delfi online news site reported on Thursday.

Vilmorus polled 1,001 people in 31 cities and towns and 35 villages by phone between April 8 and 17. The respondents were asked, "Do you agree that Lithuania has to ratify the Istanbul Convention?".

The president's press service told Delfi that Nauseda's office "periodically commissions public opinion polls on topical issues on the country's political agenda", adding that "this is an additional source of finding out people's opinions".

Related articles
Lithuanian Church calls on new coalition not to equate same-sex unions with families  (5)
Coalition agreement: what's been agreed on and where disputes are likely

Professor Ausra Maslauskaite of Vytautas Magnus University believes, however, that a more detailed survey needs to be conducted to find out what people really think about the Istanbul Convention and whether they approve or disapprove of the document.

"The single question, as it is formulated, does not give us the Lithuanian public's opinion on the Istanbul Convection," the sociologist said. "What it may tell us is what they have heard mentioned somewhere in the public space."

Almost half of Lithuanians disapprove of Istanbul Convention ratification