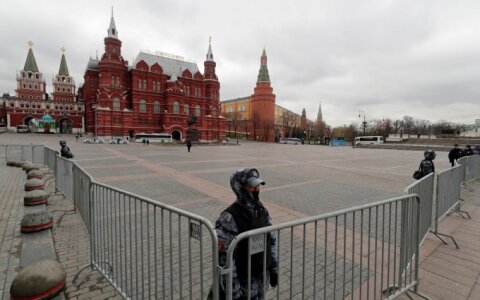 Lithuania has not yet received official information on its inclusion into the list of "unfriendly countries" by Russia, Vytaute Smaizyte, spokeswoman for Lithuanian Foreign Minister Gabrielius Landsbergis, says.

Speaking with BNS, she also confirmed that the head of the Lithuanian representation in Moscow has been summoned to Russia's Foreign Ministry on Wednesday.

"Officially, the Foreign Ministry has not received any list. Therefore, we cannot comment on that. Speaking of the summoning of the head of Lithuania's representation in Moscow, yes, he will visit the Russian Foreign Ministry today," Smaizyte told BNS.

As diplomatic tensions with Western countries continue, Moscow on Tuesday issued a list of countries unfriendly to Russia and it includes nine countries, including the United States, Lithuania, Latvia, Estonia, Georgia, Ukraine, Poland, the Czech Republic and the United Kingdom.

The Russian Foreign Ministry also said on Tuesday it had summoned the Lithuania, Latvian, Estonian and Slovak ambassadors to come on Wednesday.

Last week, the Czech government accused Russia's military intelligence agency GRU of involvement in the 2014 explosion at an arms depot in the east of the country and subsequently expelled 18 Russian diplomats it called spies.

Soon afterwards, the Czech Republic's neighbor Slovakia, as well as Lithuania, Latvia and Estonia, followed the suit and expelled a total of seven diplomats from their countries. Romania joined them last Monday and told one Russian diplomat to leave.