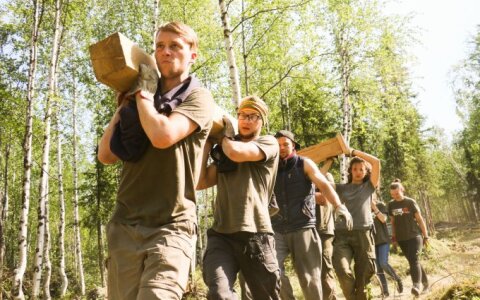 The 15-year-old Mission Siberia initiative of organizing annual expeditions to tend graves of Lithuanian deportees and political prisoners in Siberia has announced its decision to end its activity.

The project's initiators say the project is being discontinued as it is becoming impossible to visit burial sites due to the coronavirus pandemic and worsening Lithuanian-Russian relations. The project's team also says the project's initial goal has been achieved as a new generation of people has been raised and they view the deportation period "not as a sad and painful period only, but also as a historical period that makes the younger generation proud of its past".

"Amid the continuous complicated epidemiological situation worldwide and flagging prospects of improvement in the Lithuanian-Russia bilateral relations, the Mission Siberia project has made a painful but unavoidable decision. The project's main goal of visiting burial sites of deportees and political prisoners in Siberia in groups and tend graves is becoming impossible. Having launched this project 15 years ago, we felt deep in our hearts that such a day might come," Vygaudas Usackas, one of the project's initiators, was quoted as saying in a statement.

In his words, despite that, "so much has been done (during the years of the project) that we can firmly say today that this step is only a formality".

"We remain a strong value-based community of hundreds of young and active people. Mission Siberia will live in Lithuania as long as we promote historic justice, are proud of "undefeated Lithuania" and raise the young generation based on the values of love and patriotism," Usackas said.

The project finale is planned on June 14 when Lithuania will mark the Day of Mourning and Hope as the project was launched on that very day 15 years ago and was chosen for its symbolic meaning. The day is traditionally marked with the annual campaign "Say, Hear, Remember" when people will read the names of deportees and political prisoners.

More than 170 Lithuanian burial sites in Siberia and other former Soviet republics have been visited during 18 expeditions organized since the launch of the Mission Siberia project in 2006 and involving over 200 people, and more than 14,000 young people have expressed their wish to take part.

Aiste Eidukaityte, who led the project, says although the initiative's main activity has taken place in Lithuania, expeditions have been an important basis.

"Over the past 15 years, we have organized thousands of meetings with schoolchildren, higher school students, communities, as well as dozens of exhibitions, hikes and tending works in Lithuania. We have also produced 15 documentaries and issued a photo book. The success of all those activities has been strongly dependent on those exhibitions and the emotions and stories participants have brought back from Siberia and other deportation cites," she said.

The project's organizers thank partners and participants of expeditions and other events and underline that the results would have been impossible without the citizens who have contributed to the implementation of this project.

As the project nears completion, Mission Siberia will invite people to join a universal minute of silence on June 14 for the sixth time already and also the reading of the names of deportees and political prisons, which will take 24 hours.

This year, the initiate will mark the 80th anniversary of mass arrests and deportations to Siberia, which started on June 14, 1941, and lasted until 1953.

Some 275,000 people from Lithuania were sent to forced-labor camps or deported during the Soviet occupation period.