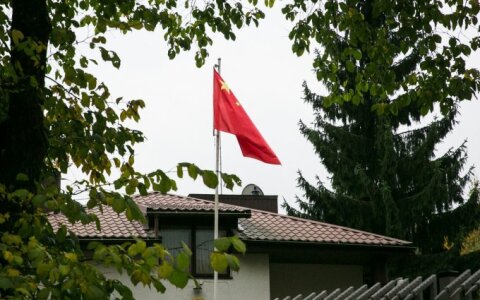 Beijing's embassy in Vilnius has condemned Thursday's human rights discussion hosted by the Lithuanian parliament as "an anti-China farce".

"On April 22, the Seimas discussed the so-called human rights issue of Xinjiang in disregard of China's solemn position as well as facts and truth about Xinjiang," the Chinese embassy to Lithuania said in a statement.

"It is an anti-China farce choreographed by some anti-China individuals intended to smear China. The Chinese side firmly opposes and strongly condemns it."

"Today, with improved people's livelihood and social harmony and stability, Xinjiang is at the best of human rights that it has ever been," according to the statement.

"Nonetheless, the anti-China forces are sparing no efforts nowadays in hyping up the so-called human rights issue of Xinjiang as well as maliciously attacking and slandering China, which are purely distortion of facts."

"Their true aim is to meddle in China's internal affairs under the pretext of human rights, tarnish the image of China, to undermine China's stability and to contain China’s development by leveraging the so-called human rights issue of Xinjiang."

"These ulterior moves are doomed to fail," the embassy said.

At Thursday's discussion, Uyghur representative Rayhan Asat said that many people are illegally imprisoned and subjected to forced labor in China.

"At least one million people have been put into camps and still more illegally imprisoned in militarized jails, factories and schools. Every Uyghur family is suffering the same thing, their crimes against humanity," the human rights lawyer said.

"The world can stop this atrocity before more tight measures are taken by the Chinese state," she said.

Many scientists, artists, and minors including her brother, are among those who have suffered from the Chinese regime, according to Asat.

The discussion on the human rights situation was organized by the parliamentary Committee on Foreign Affairs.

Zygimantas Pavilionis, its chairman, said the parliament considers human rights violations a very important issue, irrespective of whether they are taking place in China, Belarus or Russia.

Human rights groups say at least a million Uyghurs and other Turkic-speaking Muslims are being held in the so-called "re-education camps" in China's northwestern region of Xinjiang.

Observers say such facilities are part of a government campaign to forcibly assimilate ethnic minorities, sometimes using torture and forced labor. Mass rapes and the forced sterilization of women are also alleged to have taken place in the camps.

China initially denied the existence of the camps, but it now describes them as vocational education and training centers aimed at countering Muslim radicalism and separatist tendencies.