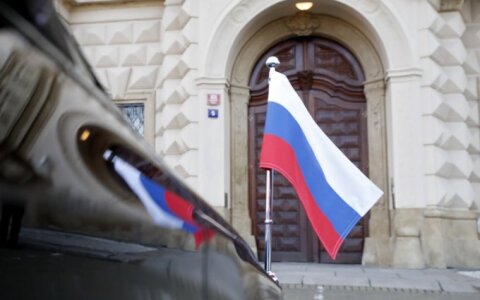 Lithuania is holding consultations with its allies on how to express solidarity with the Czech Republic in the face of Russia's aggressive actions, Lithuanian President Gitanas Nauseda's chief foreign policy advisor said on Thursday.

"The president fully supports the Czech Republic's efforts to reduce the presence of foreign military intelligence on the NATO member state's territory and stands in solidarity with the Czech government over the steps it has taken," Asta Skaisgiryte told LRT Radio.

"The Czech government has asked for solidarity from its NATO and EU partners, and we are now holding consultations through diplomatic channels on how best to express that solidarity together," she said.

Citing an intelligence report, the Czech government has said that Russia's military intelligence agency, the GRU, orchestrated two explosions in 2014, one of which killed two people and caused extensive material damage.

The Czech Republic has ordered 18 Russian diplomats identified as secret agents to leave the country and asked its partners to expel identified members of Russian intelligence services in an act of solidarity.

Skaisgiryte described the explosion in the Czech Republic and the attempted poisoning of former Russian double agent Sergey Skripal and his daughter in the UK as shocking actions by Russia.

"What is shocking is that the operations are being carried out on the territory of EU and NATO countries," she said.