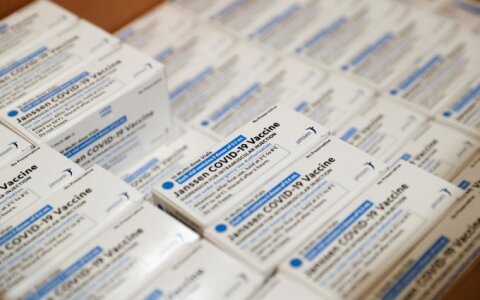 Some 4,800 dozes of the Johnson & Johnson vaccine, currently stored at the Health Emergency Situations Centre's warehouse, will be distributed among vaccination centers in Lithuania after the pharmaceutical company suggested starting distributing and using the vaccine, the Health Ministry said on Wednesday.

The one-doze vaccine will be used to immunize seniors, hospital patients with chronic diseases, as well as persons travelling to work at Lithuanian diplomatic and consular establishments in foreign countries.

Created by Janssen Pharmaceutica NV, part of the Johnson & Johnson group, the Janssen vaccine is a fourth vaccine against the coronavirus, approved by the European Medicines Agency.

The first batch of this vaccine was delivered to Lithuania on April 13 but the drugmaker asked to temporarily suspend using it until rare adverse reaction cases were investigated in the United States.

On Tuesday, the European Medicines Agency said unusual blood clots should be identified as a "very rare" adverse reaction to the Janssen vaccine, stressing that the benefit of this vaccine still outweighed the risk.

US health officials reported eight blood clotting cases following the administration of the Janssen vaccine, including one death.

Concerns over blood clots were earlier sparked by the AstraZeneca vaccine that is produced under a similar technology as the Janssen vaccine.

Up until now, Lithuania has used Moderna, BioNTech/Pfizer and AstraZeneca vaccines.