Lithuania slightly above EU average in terms of number of smokers 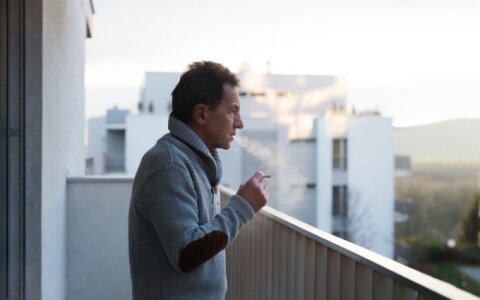 Some 28 percent of residents of Lithuania smoke, which is 5 percent more than the European Union average. And the number of smoking men is almost double the EU average, the latest Eurobarometer survey shows.

A total of 28,288 people in 27 EU member states and the UK were surveyed as part of the survey shared on Monday by Lithuania's Drug, Tobacco and Alcohol Control Department. 1,008 people took part in the survey in Lithuania.

It shows that the majority of smokers in Lithuania belong to the 25-39 age group, accounting got 39 percent of the total, compared to the EU average of 30 percent. A quarter of smokers in the country are in the 15-24 age group (a fifth in the EU), and 34 percent (27 percent in the EU) are in the 40-54 age group.

Related articles
Fifth of schoolchildren have tried drugs
Police chief: police won’t give priority to violations of smoking in balconies

55 percent of people in Lithuania said they had never smoked, the same as in the EU, and 17 percent said they used to smoke but quit (22 percent in the EU).

Lithuanian residents most often choose tobacco products and more people in Lithuania use electronic cigarettes – 11 percent, compared to the EU average of 9 percent. Younger people use them more often, with one in four people aged 15-24 using them.

13 percent said they had tried heated tobacco products, compared to 6 percent in the EU. They are also more often used by people aged 15-24 (11 percent), compared to just 3 percent among those aged 55 and above.

Renaldas Ciuzas, director of the Drug, Tobacco and Alcohol Control Department, points out that although the share of smokers in Lithuania barely differs from the EU average, there's a growing tendency in the country of people to quit the habit.

"More than half of smokers – 27 percent – have quit it. The majority of smokers are men aged 25-54. Nevertheless, experts are worried by the fact that Lithuanians smoke in larger quantities as the average Lithuanian smoker smokes 15.3 cigarettes per day, compared to the EU average of 14.2. Women smoke fewer cigarettes than men, and younger people also smoke less," Ciuzas said.

Lithuania slightly above EU average in terms of number of smokers