Landsbergis: situation in Ukraine worse than before Crimea's annexation 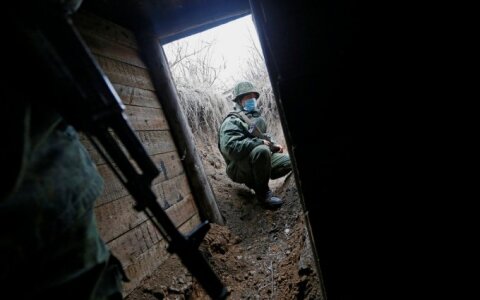 On Thursday, the minister returned from Kyiv which he visited with his Latvian and Estonian counterparts and told the national radio LRT on Friday that the impression came from the information Lithuania has and the one presented by Ukrainian officials.

"There can be an impression that the situation is more dangerous than it was in 2013 or 2014 when Ukraine came under the first attack and Crimea was occupied. The reason, probably, is that at that time Russia was trying to disguise its military forces, trying to mask its participation in the conflict. (…) Now, it’s an obvious demonstration of power: armed forces, air forces, the navy are on show," Landsbergis told LRT.

In his words, the government made attempts to contact the Russian leadership, asking the reason for this military build-up and whether it's an exercise, but has not received an official answer.

Related articles
Foreign minister: Russia's invasion of Ukraine could be 'on the table'
Nauseda says Putin can be called a killer  (1)

One of the hypotheses for Russia's ongoing actions is that President Vladimir Putin and the ruling apparatus are trying to increase the dropped popularity before the upcoming Duma election, Landsbergis says. Another hypothesis is that it's a test of whether the West will continue supporting Ukraine if real military action starts.

"I would back this theory and I believe that it's one of, probably, the biggest tests for us, the West, the Western alliance, of whether we will withstand that sabre-rattling and that threat of real military threat," the Lithuanian foreign minister said.

He says he cannot also rule out the "black scenario", but still has hope that Russia will withdraw its troops from the border and "will not start an open conflict".

"But if it does, obviously, the world will definitely respond and Russia will face painful consequences," Landsbergis said.

Landsbergis visited Kyiv with his Latvian and Estonian counterparts and the Baltic states and Ukraine later issued a joint statement urging Russia to cease its provocations through its military build-up at the Ukrainian border.

Ukraine is accusing Russia of amassing thousands of troops near its eastern border and in the annexed Crimea. Reports on such a military-build-up followed a rise in bloody clashes with Russia-supported separatists.

Meanwhile, Moscow says it has sent troops to its western border for "exercises" in response to NATO's "threatening" actions.

Landsbergis: situation in Ukraine worse than before Crimea's annexation