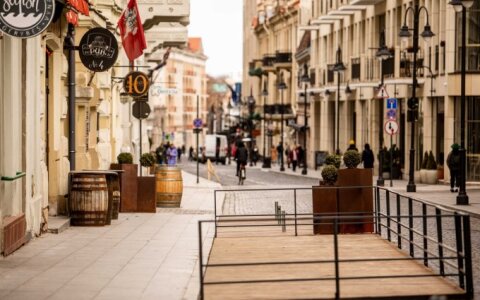 The Lithuanian government on Thursday decided to extend the existing lockdown until June but also to ease restrictions for trade, cultural, sports and catering establishments over the next two weeks.

"Let's create a predictable environment for the upcoming two weeks so that nobody expects major surprises in one or another directions, and then over those two weeks, let's prepare for the next two weeks," Prime Minister Ingrida Simonyte said during a government sitting. "I really hope everything will take place very cautiously, gradually, and at the same time vaccination and testing will help controlling the situation."

Events with up to 150 people

Cinemas and professional stage art halls will be allowed to reopen as of April 19, and also outdoor and indoor events with audiences will be allowed. The government initially considered limiting the number of visitors to no more than 50, but eventually decided to increase the number to 150. Participants will not be able to occupy more than 30 seating places in the room.

Also, stores at shopping centers, which have been closed so far, will be able to reopen but will be allowed to work only on working days.

Gyms are allowed to reopen as of April 26 but they will be required to ensure a space of 20 square meters for one person. No more than five people, excluding the provider of services, will be allowed to attend group classes.

Also, restrictions will be eased for people with coronavirus immunity from having had the virus or having been vaccinated. They could be allowed to be in groups of no more than 10 people and use public transport or be in public places in close contact, attend family gatherings and take part in excursions. Such people would also be allowed to visit residents of all care facilities and hospital patients. The lease of premises for such people's parties will also be allowed.

All businesses allowed to reopen were closed in early November when Lithuanian was placed under the second lockdown.