Skuodis: Rail Baltica should have a direct access to Vilnius and Kaunas airports 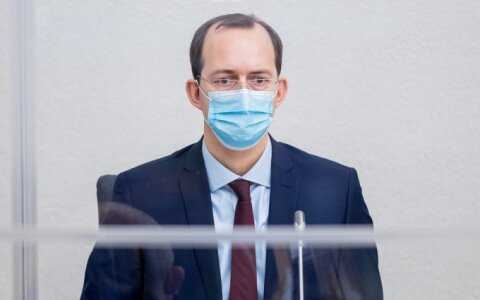 Minister of Transport and Communications Marius Skuodis initiates discussions on the connection of the Rail Baltica European railway link with Vilnius and Kaunas. Options to connect Vilnius and Kaunas airports with Rail Baltica were discussed during the Minister’s meeting with mayors of both cities and representatives of Lithuanian Railways and airports.

The objective of the Rail Baltica project is to connect three Baltic States’ capitals via the European railway network. According to the Minister of Transport and Communications, in order to maximise the European railway network potential and to offer the best and highest quality services to passengers and freight carriers, it is necessary to ensure that a European track gauge has a direct access to Vilnius and Kaunas airports instead of being constructed near them.

“With a European gauge, Lithuania will have a more convenient transport connection with the neighbouring Baltic States’ capitals and, additionally, a faster travelling option to the major Lithuanian cities. Many travellers moving between Kaunas and Vilnius already choose a train because of faster connection and convenience. Thus, we are to continue our discussions on what should be done with regards to the needs and expectations of the two cities and in order to ensure easier and more convenient trips to the airports by choosing trains as a sustainable and eco-friendly type of transport,” the Minister Skuodis said.

Related articles
Skuodis: Lithuania supports Poland’s objective to include the Via Carpathia route in the Trans-European Transport Network
Lithuania and Sweden are to coordinate actions in implementing Green Deal and transport innovations

Currently, there are four potential Rail Baltica development location alternatives between Vilnius and Kaunas. The one that meets the connection needs the best and has the least environmental impact is to be selected this year.

The Minister stated that taking into account a long-term perspective of the project, it is necessary to find solutions of constructing the European track gauge with direct access to the airports, rather than near them. Considering potential Rail Baltica line options between Vilnius and Kaunas, as well as the airports’ development plans, this type of link has a great future potential. Moreover, it could generate additional passenger traffic.

At the initiative of the Ministry of Transport and Communications, remote meetings with the mayors of municipalities planning to have Rail Baltica tracks are to be held in April and May. These meetings are to focus on relevant issues and pressing matters of specific regional municipalities. Discussions will be open to the representatives of business communities.

Rail Baltica is a greenfield rail transport infrastructure project with a goal to integrate the Baltic States in the European rail network. 870 km of high-speed double-track electrified railway with 249 km/h speed trains is to cross Lithuania, Latvia and Estonia. The project is scheduled to be completed by the end of 2026.

Skuodis: Rail Baltica should have a direct access to Vilnius and Kaunas airports