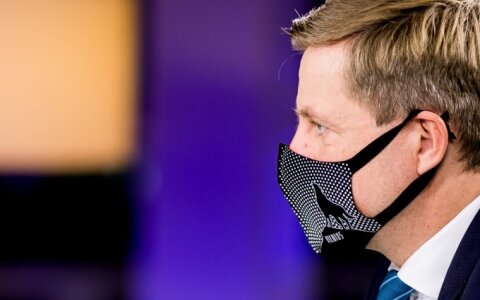 Vilnius Mayor Remigijus Simasius on Tuesday called on the government to open up access to vaccination to broader groups of people.

"The main challenge now is to eliminate this strange disproportion where some people in priority groups don't want to get the shots and we have to call them several times to persuade them, while many others, starting with police officers (...), want to be vaccinated, but aren't allowed," he told LRT Radio.

Currently, the municipality has to allocate at least a weak to each priority group before it can move further down the priority list, the mayor said.

In Vilnius, everyone who wanted the jab and was eligible for it could receive it over the Easter weekend, and now it is time to move on to other people, such as police officers, he said.

Simasius believes that the authorities should first offer shots to those willing to get them and then return to priority groups, such as the elderly, who did not show up for the vaccine.

Almost 9,700 people were vaccinated in Vilnius over the long weekend, which shows that the capital is ready for mass vaccination, the mayor said.

He expects the government to take appropriate decisions this week.

Erlandas Galaguzas, the mayor of the eastern town of Visaginas, also believes that it is time to move to mass vaccination.

"We are ready for that," he told the radio station.