Court tightens sentences for Mel and Ivanov in Jan 13 case 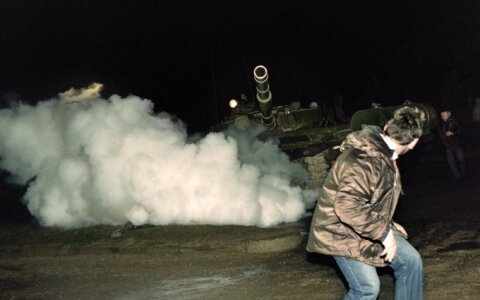 Lithuania's Court of Appeal on Wednesday decided to partially satisfy part of the appeals against the previous court ruling in the high-profile January 13 case and change punishment for Yuri Mel and Genady Ivanov and another 14 convicts.

Two convicts had their sentences reduced, and they were tightened for the remaining convicts.

Also, the court satisfied a civil lawsuit of almost 11 million euros for pecuniary damages for the State of Lithuania.

"The court concluded that all 67 persons charged in the case executed the policy of the top Soviet Union leadership and the Soviet Communist Party, sought to re-incorporate Lithuania into Soviet Union and organized a military campaign for that purpose and used violence against the people of Lithuania, civilians, killed and maimed them in other ways," the judge said during the hearing.

"All persons charged and convicted in this case, acting in a group of accomplices, intentionally, while executing the policy of another state, the Soviet Union, and the Soviet Communist Party, carried out large-scale and systematic attacks on civilians, persecuted them for political and national motives, killed them, seriously impaired their health, killed persons protected by international humanitarian law during aggression and an international armed conflict, acted inhumanely towards persons protected by international humanitarian law, seriously maimed them, used intimidation and terror measures, unlawfully restricted and took away their freedom, ordered to carry out and carried out a war attack on civilians in violation of international humanitarian law, Lithuania's international treaties and universally accepted national customs on means of warfare, ordered the use of and used prohibited means of warfare during the war actions," he underlined.

Judge Ernestas Rimselis, who presided over the judicial panel, said during Wednesday's court hearing the court decided to partially satisfy the appeals of two convicts, the Prosecutor General's Office and victims Robertas Povilaitis and Ona Povilaitienė.

The court decided to issue a concurrent 5-year prison term for Ivanov who was initially sentenced to four years in prison. The court also extended Mel's previous sentence by three years and issued a concurrent prison term of ten years.

In Mel's case, the court included in its sentence the seven years Mel spent in detention and voluntarily serving the previous sentence that was not in force yet. Therefore, he will spend another three years behind bars.

"After hearing the case, the court concluded that clearly more lenient sentences were issued to those two convicts than those issued to other troops who were part of tanks' crews," the judge said.

According to Rimselis, obviously, it was probably done only because they were the only participants in the judicial process.

Speaking of Ivanov, the judge pointed out that he – as commander of a four-tank group – was issued the same sentence by the court of first instance as ordinary tank drivers and pointers who executed his orders.

According to Rimselis, Mel was found to be in the same position as the court initially sentenced him to seven years in prison, although his tank's pointer received ten years.

In total, the Court of Appeal changed sentences for 16 out of the 67 convicts in this case, and only two convicts had their prison sentences reduced.

The longest prison term of 15 years was issued to Vasily Kustrio, commander of the 235th regiment of the 76th Guards Air Assault Division, who was not only involved in planning orders but also led the assault on the Press House in Vilnius and personally injured at least one person.

Speaking of the defense lawyers' recurrent arguments, Rimselis made a review of them and commented as to why they were rejected.

"Firs of all, doubts were raised as to whether Lithuanian courts can in general hear such cases. The judicial panel dispelled such doubts," he said.

In his words, the second raised issue had to do with the effect of the Criminal Codes and the fact that the laws under which the guilty verdicts were issued were adopted only in 2011.

In his words, the exception applies when clauses in line with international law are included in to the Criminal Code.

The court also looked into other arguments that only people who executed orders were sentenced for crimes against humanity, but not the person who issued those orders.

"The court recognized that the execution of an order, as a circumstance, can be significant in deciding liability issues, but that does not deny the issue of liability and that can be taken into account when deciding on the punishment," the judge said.

He also pointed out that sentences were issued to different-rank army officers and paid attention to the fact that they could have refused to execute the orders as they should have understood that they were completely in violation of the principles of international law and violated human rights.

The judge underlined that even during the January events there were people who realized the impact of their actions and refused to execute the orders.

The majority of the defendants were sentenced in absentia as Russia and Belarus refused to extradite them. Only two convicts – Yuri Mel and Genady Ivanov – heard the ruling in person.

Mel, who was the only detained person awaiting the ruling, the court initially issued a seven-year prison sentence, and Ivanov was sentenced to four years in prison.

A total of 61 appeals were filed in this case by 59 convicts and their lawyers, as well as the prosecutors, victims and civil plaintiffs.

According to the Prosecutor General's Office, the convicts were issued too-soft punishments, taking into account their crimes. Prosecutors believe that while issuing sentences to seven convicts, the court failed to take into account their role in the committed crimes against humanity and war crimes as some of the convicts received shorter sentences than the minimal prison sentences provided for in the law.

The prosecutors also asked in their appeal to state that the convicts acted in an organized group, which should be considered an aggravating factor.

Moreover, the court was asked to award more than 11 million euro in pecuniary damages from all convicts. The damage includes victims' treatment costs, the installation of memorials and infrastructure repairs.

The defense lawyers stated in their appeals they disagreed with the factual circumstances in the case and the legal arguments and south acquittal for their clients.

Court tightens sentences for Mel and Ivanov in Jan 13 case