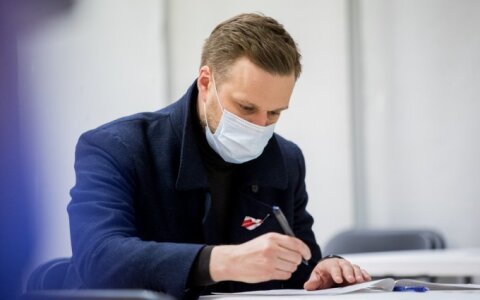 Lithuania’s Foreign Ministry turned to the European Commission with a request to evaluate whether it was correct to place Belorus, a Belarusian-owned spa in Lithuania, under the European Union's (EU) sanctions against the Minsk regime and the information received left no reason to doubt about the application of those measures, Foreign Minister Gabrielius Landsbergis told the MPs on Thursday.

He pointed out, however, that the final decision on the issue should be made by court.

“We turned to the European Commission and asked for its informal opinion, whether the implementation of sanctions was correct. In accordance with existing legislation and that information, which has been provided to us, the sanctions are applied correctly but the final say in such situations always rests with court,” Landsbergis told the MPs.

According to him, the Foreign Ministry allowed to free up some of frozen funds on a request from the spa so as to enable it to pay out wages to employees. Now the ministry “will have to take a decision on the request to allow paying wages for February”.

“We will use all possibilities provided by law and seek to make sure that people get money. We have done that up to now and will do that in the future,” the minister added.

According to the Lithuanian Center of Registers, Belorus is owned by the Management Department of the Belarusian president's administration. The department, which reports directly to Alexander Lukashenko, is headed by Viktor Sheyman who has been put on the EU’s sanctions list.

Swedbank froze Belorus' accounts in December, saying the move was due to EU sanctions.

Opposition politicians who summoned the minister to the Seimas reproached him for the lack of government’s support for more than 300 employees of the spa.

Giedrius Surplys, an MP of the Farmers and Greens, said that the opposition in principle supported sanctions against the regime of Alexander Lukashenko but had doubts about their application to the spa and called on the government to work out a plan of assistance to its employees.

Following the freezing of the spa’s accounts, the Lithuanian parliament adopted a law providing for one-off payments to the spa’s employees.

Some workers of the spa and opposition politicians claim that support in the form of one-off payments is insufficient for people who lose their jobs. The authorities were also criticized for failure to assess the potential impact of sanctions on this spa when member states considered the list of sanctions.

Meanwhile, government’s representatives urge the employees of the spa to accept one-off payments and look for another job. They point out that the responsibility for the situation lies with Lukashenko’s regime.

The Belarusian-owned spa reported on January that it had turned to court over a freeze on its bank assets.