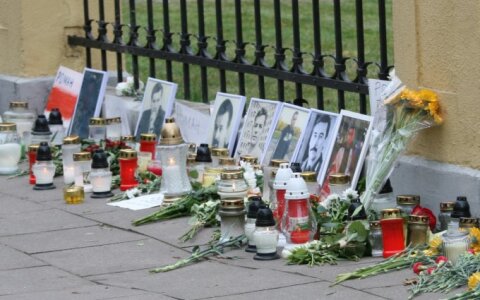 Lithuania and 18 other countries have expressed their full support for a newly-established platform for the collection of information about human rights violations committed by the regime of authoritarian Belarusian President Alexander Lukashenko.

"The unprecedented human rights violations continue in Belarus. Thus, we must demand that Lukashenko's regime and his accomplices be held accountable. Representatives of force structures responsible for the ongoing repression of peaceful citizens must know and feel that they will not go unpunished, but will be held accountable for their crimes sooner or later," Lithuanian Foreign Minister Gabrielius Landsbergis says.

The International Accountability Platform for Belarus (IAPB) was on Wednesday established Belarusian and foreign NGOs. It will be led by the Danish Institute Against Torture DIGNITY with such co-leads as the Belarusian Human Rights Center VIASNA, the International Committee for the Investigation of Torture in Belarus, and the British NGO REDRESS.

The IAPB aims to collect, consolidate, verify and preserve information, documentation and evidence of severe human rights violations committed in Belarus in the run-up to the presidential election of 9 August 2020 and its aftermath.

According to the office of Belarusian opposition leader Sviatlana Tsikhanouskaya, the platform will not change a possible future UN mechanism but will "fill the gap" until such an UN mechanism is created.

The Baltic states, the UK and the United States are among the countries that supported the platform.

Estonia plans to allocate 30,000 euros for this platform, with the country's Foreign Minister Eva-Maria Liimets saying the situation in Belarus has not improved.

Lithuania's Foreign Ministry told BNS, "the issue of financial assistance for the IAPB is on the table but no decisions have been made yet regarding the amount".

Ruling Belarus since 1994, Lukashenko was declared the winner of the August 9 presidential election. Based on the official figures, Tsikhanouskaya received over 10 percent of votes and came in second, but the country's opposition and the West believe the election was rigged.

The election results sparked an unprecedented wave of protests in Belarus. After it died down, protests of local nature continue in the country.