Nausėda: sanctions against Russia must continue until it leaves Ukraine's territory 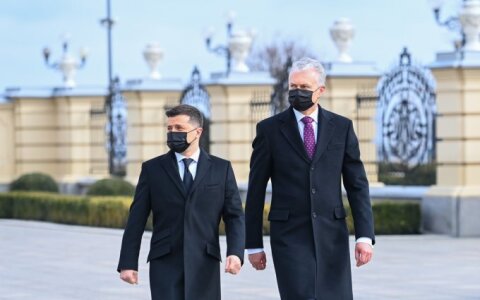 Sanctions against Russia must continue until it withdraws from the illegally occupied territories of Ukraine, Lithuanian President Gitanas Nauseda said in Kiev on Friday, addressing members of the Verkhovna Rada.

"Lithuania sees Ukraine’s tireless efforts in seeking a political solution to the conflict in Donbas. We unequivocally call on Russia and the groups it supports to immediately implement the requirements of the Minsk Agreements. Sanctions against Russia must continue until it withdraws from the illegally occupied territories of Ukraine," Nauseda said.

In his words, Lithuania will continue supporting Ukraine's aspiration to join the European Union and NATO.

The Lithuanian president called on Ukrainian lawmakers not to forget that successful reforms are essential for the well-being of the people and for the stability of the state itself.

Nauseda said he's looking forward to hearing directly what the Ukrainian authorities, representatives of civil society and businesses, international partners, and experts think about your country’s future when we gather for the Ukraine Reform Conference in Vilnius in July.

The president also reminded that there are businesses in Lithuania that want to contribute to Ukriane's wellbeing.

"My country’s businesses are also looking forward to contributing to the welfare of Ukraine. Lithuania seeks to develop relations with Ukraine in the areas of telecommunications, information technology, and innovation," Nauseda said.

Addressing members of the Verkhovna Rada, the Lithuanian president also reminded of "common concerns" caused by the Astravyets nuclear power plant in Belarus.

"Russia, which built this power plant, not only puts the health of the people in the region at risk but also seeks to use this project for expanding its influence. The growing vulnerability of Belarus is a direct threat not only to the interests of Lithuania but to Ukraine as well," the Lithuanian leader said.

He also called on the Ukrainian government and its people to support the position of the Baltic States on the Belarusian nuclear power plant and not to buy electricity produced in Astravyets.

Nausėda: sanctions against Russia must continue until it leaves Ukraine's territory