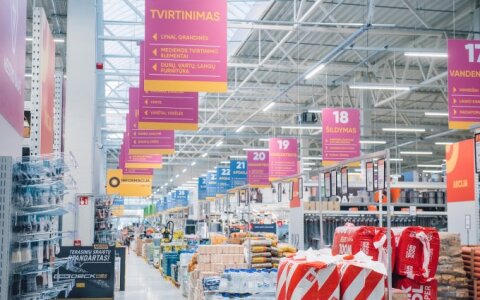 The Lithuanian Employers' Confederation has lodged a complaint with the European Commission over the Lithuanian government's unreasonable and discriminatory regulation of business activity during the lockdown, the federation's president Danas Arlauskas said on Friday.

In its complaint, the federation states that the government's rules set for business operation are inconsistent, non-objective, not based on clear evidence or calculations on the application of specific restrictions for businesses involved in selling food or other goods.

According to Arlauskas, for example, it remains unclear what was the basis for the government's decision to introduce different floor-space-per-shopper requirements, the requirement to have direct outside access or the decision to only allow shops with a specific floor space to reopen (the federation has in mind the former requirement for a floor space of 300 square meters).

Lithuania's Competition Council has said it is not looking into how much impact the coronavirus crisis has had on the redistribution of the retail market when some retailers were allowed to operate and others were not. Its chairman Sarunas Keserauskas warns that not all statistics, for example, retail turnovers, can reflect the market changes caused by the crisis.

The second national lockdown was introduced in Lithuania in early November by the Skvernelis government. Cafes, bars and restaurants, gyms, cinemas were closed then, fans were banned from sports events, and also classes were restricted in schools.

Prime Minister Ingrida Simonyte' government further tightened the lockdown in the middle of December and ordered non-food shops and the majority of services providers to close, and also banned residents from travelling to other municipalities without serious reasons and banned people from seeing members of other households. Remote learning for schoolchildren was also extended.