Nauseda: Ukrainians wrote in blood during Maidan that they can determine country's future 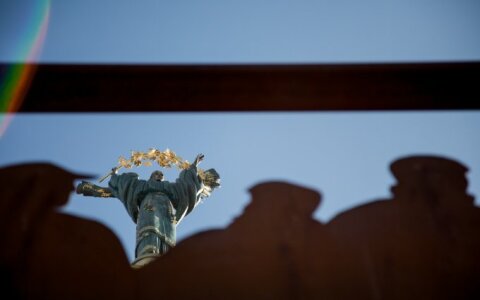 Lithuanian President Gitanas Nauseda, currently on an official visit to Ukraine, on Thursday paid respect to Maidan victims, stating that the people of Ukraine this way "wrote in blood" that they can determine their future.

"The people of Ukraine showed during the Maidan and wrote in the blood that they can determine the future of their country. That they will defend the European identity and the Euro-Atlantic direction," the president posted on Facebook on Thursday.

The Lithuanian leader also called for not forgetting Crimea's annexation as its 7th anniversary is marked.

"We have no right to forget the occupation of Crimea! I bow my head to Ukraine's heroes who sacrificed their lives for their country's sovereignty. Our duty is to support them," Nauseda wrote.

During his two-day visit, Nauseda will meet with his Ukrainian counterpart Volodymyr Zelensky. The two presidents will chair a bilateral presidential council meeting also attended by seven members of the Lithuanian government. The two countries plan to sign a joint declaration on Ukraine's European perspective.

It’s the first bilateral visit by the Lithuanian president since last July as Nauseda has limited visit due to the coronavirus pandemic.

Nauseda: Ukrainians wrote in blood during Maidan that they can determine country's future