Nausėda: three candidates for envoys agreed on seven more up next 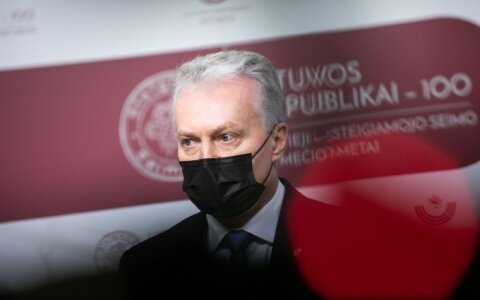 The Lithuanian president has agreed on three candidates for ambassadors with the government and the Seimas and is waiting for proposals on seven more ambassadorial posts, Asta Skaisgiryte, Gitanas Nauseda's chief foreign policy advisor, has said.

“Indeed, three candidates, three ambassadorial posts were agreed on some time ago and the process has started. However, the number of vacancies for ambassadors is much bigger, seven more or so, and the president is waiting for nominations from the foreign minister,” she said in an interview to LRT Radio on Thursday.

The agreed candidacies included ambassadorial posts in the United States, the Council of Europe and “the post in New York that will become vacant at a later date”, Skaisgiryte said adding that an agreement on a candidate for the Lithuanian representative to the European Union had not yet been reached.

“Unfortunately, a candidate for the ambassador to the European Union, to Brussels, which has been vacant since summer, has not yet been proposed. The Conservative party turned down the candidate proposed by the president hence now the president is waiting for them to nominate their candidate…,” she added.

The president confirmed earlier that he wanted the job of the ambassador to the EU to be given to Vygandas Jankunas, a policy officer at the European Commission who helped him during his 2019 presidential election campaign.

Diplomatic sources said earlier that Lithuania's former ministers of foreign affairs and defense, Linas Linkevicius and Raimundas Karoblis, had been considered as candidates for the ambassadorial jobs in Washington and Brussels.

However, Nauseda said in late January that he would not appoint the two former ministers as ambassadors because they needed a "political cooling-off" period.

According to BNS sources, diplomat Audra Plepyte is being proposed for Lithuania's ambassador to the United States.