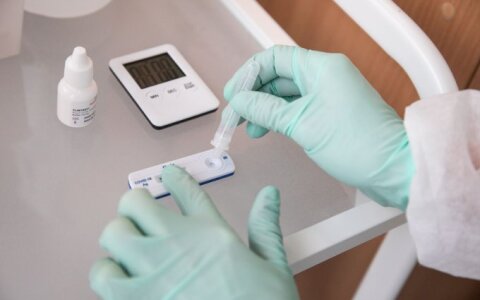 Amendments that would allow introducing mandatory regular COVID-19 testing for workers of certain areas will be put before the Lithuanian parliament on Tuesday.

Under the planned amendments to the Law on the Prevention and Control of Communicable Diseases in Humans, in case of an extreme situation, the government would have powers to draw up a list of professions and areas of activity where workers would be allowed to work only upon prior testing and subsequent regular checks to establish whether they are not ill.

Also, if an outbreak was detected at a workplace, workers would be allowed to work only upon testing. The National Public Health Center would produce a list of workers that need to undergo tests.

If a worker refused to undergo testing in time without a serious reason, their employer would be required to remove that person from work and not to pay for that day or move the person to working remotely until the day that person undergoes testing.

The amendments also state that additional health checks for infectious diseases might be funded from the state budget under a procedure established by the government.

The Cabinet proposed considering these amendments under a fast-track procedure.