Ministers drawing up plans to bring all children to primary schools 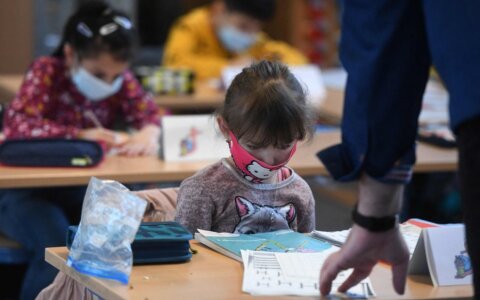 Lithuania's ministers for health and education ate drawing up plans to bring all children to primary schools. The Cabinet is scheduled to consider them on Wednesday, Prime Minister Ingrida Simonyte said during the Cabinet's Monday meeting.

"Later this week, when the health and education ministers will produce a normal text of proposals or principles, we will consider conditions under which primary schoolchildren could go back to in-classroom learning," she said.

Health Minister Arunas Dulkys said the proposals would be submitted for the Cabinet's next meeting which is scheduled for Wednesday.

Now in Lithuania, children are allowed to return only to those primary schools that ensure testing of pooled samples of children and teachers. The method has allowed resuming classes at four schools in Vilnius and there are plans to resume in-class teaching in another 60 schools across the country.

The majority of schools moved to distance learning or hybrid learning when Lithuania was put under lockdown on November 7.

Ministers drawing up plans to bring all children to primary schools