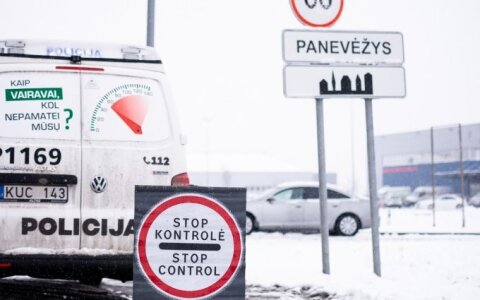 Lithuania's government on Monday extended the existing movement restrictions until the end of this month in 16 municipalities, including Vilnius and Vilnius District, Klaipeda and Neringa.

The Health Ministry had proposed extending the existing movement restrictions in these municipalities where the 14-day number of new COVID-19 cases per population of 100,000 stands at or exceeds 200.

Prime Minister Ingrida Simonyte says that will allow winning more time as the British variant continues to spread to vaccinate more people in risk groups. Moreover, more and more activities are reopening in the country.

And also zoos and botanical gardens have been included to the list of closed spaces people are allowed to visit.

„If someone asked why we need to win that time, so probably we need to win more time for vaccination. We are now vaccinating those people who have the highest risk of death or severe illness if they catch the virus," Simonyte said during the Cabinet meeting.

"People want and we also want to have as fewer of those restrictions as possible. On the other hand, we see objectively that in other countries that probably were too quick with their decisions, that situation today is worse than they expected, and a lot of explanation might have to do with that mutation," the prime minister added.

In her words, the existing data shows the situation's improvement has now stalled and that matches with the spread of the British variant.

The Cabinet meeting was not followed by a press conference. Rasa Jakilaitiene, spokeswoman for the prime minister, told BNS it was not planned as motives for the government's decision and statistics were fully presented during the meeting.