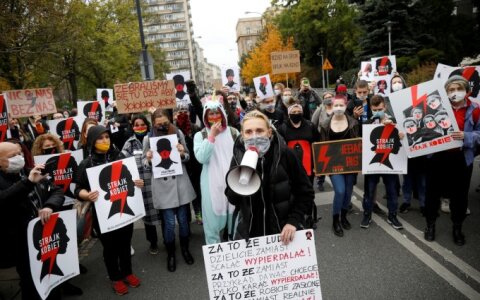 A group of Lithuanian parliamentarians suggest that the government offer assistance to Polish women who want to terminate their pregnancies due to fetal defects amid a near-total ban on abortion in the neighboring country.

The temporary Group on Development Cooperation, Reproductive Health and Rights at the Seimas submitted the proposal to the government on Monday.

"Women deprived of the right to a safe abortion when it is needed because of serious fetal malformations are the part of society that our centuries-old friendship with Poland obliges us to help," Conservative MP Arunas Valinskas, a member of the group, told a news conference.

"We are calling on the government to (...) help Polish women to get tested in Lithuania for fetal malformations and if severe malformations or development abnormalities are found, terminate their pregnancies free of charge or for a symbolic price, like Sweden and several other European countries have done," he added.

Related articles
5 conspiracy theories about COVID-19 that the world still believes in, and a game to help develop resistance to lies  (1)
Nausėda calls on Polish leader to seek public dialogue on human rights

Social Democratic MP Dovile Sakaliene, the group's chairwoman, noted that around 2,000 abortions were performed because of severe fetal abnormalities in Poland last year.

Given that other European countries have offered similar assistance to Polish women, Lithuania would have to accept a relatively small number of them, the parliamentarian said.

"This would be a symbolic step, but we hope that it will be very important from a moral and psychological point of view," she added.

Thousands of people took to the streets of Poland to protest against the near-total ban on abortion when it came into force in late January.

Under the new rules, abortion in Poland is only permissible in the case of rape, incest or a threat to the mother's health and life.