Skuodis: Lithuania supports Poland’s objective to include the Via Carpathia route in the Trans-European Transport Network 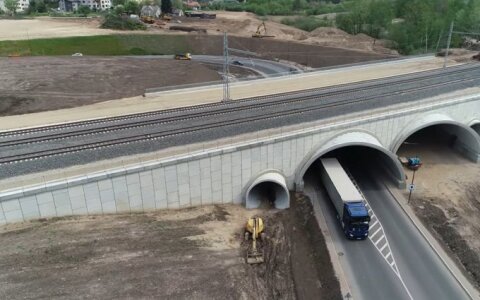 Lithuania supports the ambition of Poland and other countries along the Via Carpathia to include the entire Via Carpathia route, a part whereof also runs in Lithuania, near the eastern part of Poland, south of the Via Baltica, in the Trans-European Transport Network (TEN-T). This would help to better develop infrastructure and open up new opportunities for the growth of transport flows. This was stated by Marius Skuodis, the Minister of Transport and Communications of the Republic of Lithuania, on Saturday during his participation in the remote conference “Europe of the Carpathians” held by the Sejm of the Republic of Poland.

It is important for Lithuania and other Baltic Sea Region countries, both economically and in terms of connectivity, to have a sufficiently developed TEN-T, in other words, the Via Baltica and the Rail Baltica routes. These are the main transport connections that will allow easier and faster access to Lithuania from Western or Southern Europe for both passengers and cargo, also create more favourable conditions to promote exports to other EU member states or countries across the world.

A key part of the TEN-T North Sea–Baltic corridor is the Rail Baltica project, which ensures interoperability with other Pan-European transport corridors and other modes of transport.

Railway networks with different gauges in the EU and Lithuania are one of the main obstacles for smooth and efficient operation of international rail transport services in Europe. The construction of the entire Rail Baltica railway line, which connects Western Europe via Poland, Lithuania, Latvia, and extends to Tallinn and, possibly, Helsinki in the future, will create a completely different level of connection, which will provide the Baltic states with new opportunities for economic development.

“Our main priority is to commission the Rail Baltica project as soon as possible for it to start bringing economic return to Lithuania and all of the Baltic states”, the Minister Marius Skuodis emphasized at the remote conference session. “Lithuania’s ambition is to serve freight transportation along this corridor together with its partners in Poland.”

LTG Cargo Polska established at the end of 2020 has offered its customers Amber Train, intermodal freight service, on the route Šeštokai–Muuga (Estonia).

“The Via Baltica road transport link is also an integral part of this corridor. We must make every effort to speed up the completion of the infrastructure of this link for this road to fully comply with the requirements of the TEN-T in both states (Poland and Lithuania)”, the Minister M. Skuodis stated.

According to M. Skuodis, Lithuania plans to implement fundamental changes in the taxation policy for road transport. From 2023 it is planned to replace the road user charge with electronic tolls by distance travelled. This will have a major impact on the entire transport system.

The construction of the Rail Baltica and the entry into force of the distance-based charging system may significantly change the organization of the entire transport chain along the Via Baltica and the Via Carpathia. It will also be a major incentive to make road freight more environmentally friendly with the possibility of redistributing flows between individual transport sectors. This is important for pursuing the goals of the European Green Deal and reducing greenhouse gas emissions in the transport sector.

Skuodis: Lithuania supports Poland’s objective to include the Via Carpathia route in the Trans-European Transport Network