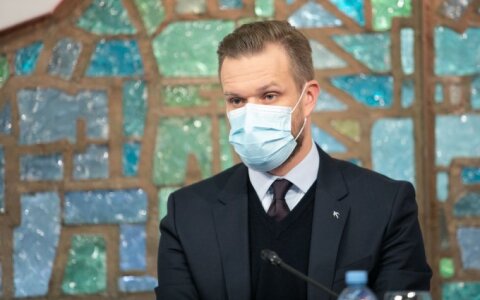 "Today's agreement is the first step on the road to success," Landsbergis said in a press release on Monday evening after EU foreign ministers agreed to impose sanctions on four senior Russian officials deemed responsible for the jailing of Navalny and a crackdown on his supporters.

"It is important not to limit ourselves to individuals who are directly responsible for the conviction of Alexei Navalny," he said. "We must seek to put on the sanctions list also those whom the regime has used to orchestrate the case against Navalny, including persons from Putin’s inner circle."

The agreement on sanctions has shown that the EU can react both quickly and unanimously, according to the minister.

"If we want to help civil society in Russia, the best way to do this is to impose sanctions on those Russian judges and prosecutors, who are part of the corrupt law enforcement system and legitimize the systematic repression of Russia's democratic institutions, free media and political opposition by the regime," he said.

The targeted individuals have not been named yet.

Navalny's associates had urged the EU to hit oligarchs accused of funding Putin's rule with sanctions. Diplomats say the current sanctions target those directly linked to the crackdown.

The EU has already hit Russia with sanctions over the 2014 annexation of Crimea and the fueling of the conflict in eastern Ukraine.

Last October, the bloc sanctioned six Russian officials over the poisoning of Navalny with the nerve agent Novichok.

The latest sanctions will be imposed under the EU's new human rights regime.

"Sanctions under the EU global human rights sanctions regime can be imposed on those responsible for the acts of genocide, crimes against humanity and other serious human rights violations or abuses (e.g. torture, slavery, extrajudicial killings, arbitrary arrests or detentions). Other human rights abuses can also fall under the scope of the sanctions regime where those violations are widespread, systematic or are otherwise of serious concern," the ministry said in the press release.