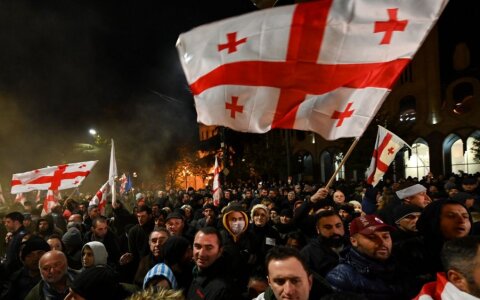 The Lithuanian Foreign Ministry said on Thursday it was concerned about the recent political situation in Georgia.

"Parliament's decision to waive the legal immunity of Nika Melia, the leader of the main opposition party, the United National Movement, and the possible arrest of the politician reduces the possibility of dialogue between the ruling party and the opposition, raising questions about selective justice and the rule of law in the country," the ministry said in a statement.

"We call on our partners in Georgia to step away from the red lines, take advantage of the opportunity to de-escalate the situation and look for ways to normalize the situation, as well as to return to constructive political dialogue," it quoted Foreign Minister Gabrielius Landsbergis as saying.

The statement urges Georgia’s authorities and the opposition "to refrain from actions that might lead to further stalemate and division of society" and "from possible use of force against citizens".

"Further escalation of the situation will only damage the country's future prospects. We are convinced that Georgia needs authorities with the capacity to take important decisions in the interests of the people, both in the light of recent challenges and in the context of implementation of reforms under the European Union and Georgia Association Agreement," it reads.

Georgia's Prime Minister Giorgi Gakharia announced his resignation on Thursday over plans to enforce a court's order to arrest Melia, saying it risked escalating a political crisis in the country.