Many people travel to Poland without pre-filled forms, no queues 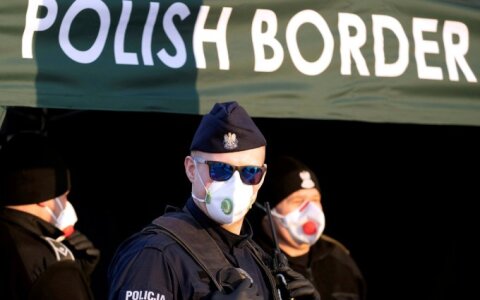 As Lithuania stepped up controls on the Polish border on Wednesday morning, quite a number of people still don’t have special pre-filled forms but there are no queues yet, a representative of Lithuania's State Border Guard Service said.

"There are no queues. There are many people without the forms, and a number of them didn’t even know about it, but there's no situation with long queues," Giedrius Misutis said.

In his words, the majority of vehicles crossing the border are now trucks. Although truck drivers are not required to self-isolate upon arrival from a foreign country, they should also fill in the forms, although some of them are not aware of that.

"They should also fill in the form of the National Public Health Center. And we’ve hade a number of cases when they are convinced that they do not need to do that. There's a lot of not knowing," the SBGS representative said.

Related articles
Lithuania to introduce controls on roads to Poland as of Wednesday
Stuck in Kent: how Brexit red tape choked cross-border trade

Road controls on the Polish border were introduced at 8 a.m. Similar checks have been taking place at airports and seaports from last week.

Antanas Montvydas, deputy commander of the State Border Guard Service, said earlier officials would help a traveler who has not registered prior to arrival to complete the form on the NPHC website on the spot. Those who refuse "will be held liable under the Code of Administrative Offences", according to Montvydas.

All travelers coming to Lithuania have to fill out the NPHC questionnaire prior to arrival and present a negative coronavirus test carried out no later than 48 hours before the arrival. They can also have the test done in Lithuania and self-isolate for 14 days, with a possibility to cut the isolation time by having a test done on the tenth day of isolation at their own expense.

They are also required to have ore-filled NPHC forms. All travelers must isolate for 14 days.

Many people travel to Poland without pre-filled forms, no queues